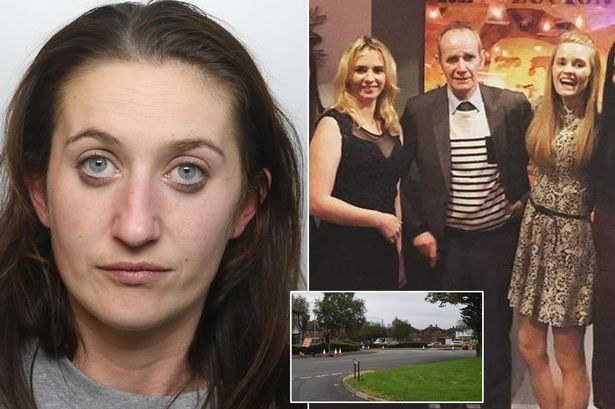 A drugged-up driver who killed a dad-of-five “must have” stepped over his body to flee the scene, a court has heard.

She was picked up from the scene in Runcorn, Cheshire by her boyfriend who took her to her grandmother’s home, the Liverpool Echo reports.

When police arrived Clout, who had completed a counselling diploma during the day, claimed her car must have been stolen.

The mum-of-three was taken to a police station but officers deemed her unfit to interview.

She was breathalysed which revealed she was at twice the legal alcohol driving limit.

Clout later admitted she had “lost control” of the car while under the influence of drink and drugs.

Police found an empty vodka bottle, a full one, and “white powder” at her home in Warrington, Cheshire.

Clou admitted causing death by dangerous driving, failing to stop, and driving with excess alcohol, cocaine and its metabolite benzoylecgonine.

She was jailed at Chester Crown Court on Monday for six years and handed a four-year driving ban.

A passenger in a passing car, Daniel Henderson, said the Punto had gone through a fence and across a path before stopping against another fence.

The court heard a “distressed” female was in the driver’s seat and trying to get out but the door was “wedged shut”.

She climbed across the seating and emerged from the passenger side, and walked away, apparently “drunk”, it was said.

John Philpotts, prosecuting, said: “It appears when the defendant got out of the vehicle, she must have had to step over Mr Moore.”

Mr Moore suffered injuries including a fractured skull, a broken leg and arm, broken ribs, and an injury to his lung.

He was left unable to speak or move and enduring repeated infections before life support was withdrawn on March 11, surrounded by his five daughters.

Judge Simon Berkson said: “It’s clear the time was a difficult time for all his family.

“He will be greatly missed by those who loved him, in particular his five daughters.”

The judge told Clout: “He was taken before his time by your selfish and dangerous actions.”

Simon Christie, defending, said her actions had caused a “lifetime of grief” and “wrecked the lives of a great many people”.

Character references spoke of her as “diligent, thoughtful and caring” and said the crash was “completely out of character”, he added.

How to Choose the Right Hair Color?

No Bra Day – a Day to Raise Breast Cancer Awareness

Teen, 18, ‘strangled, tortured and left for dead naked in bath by Grindr date’