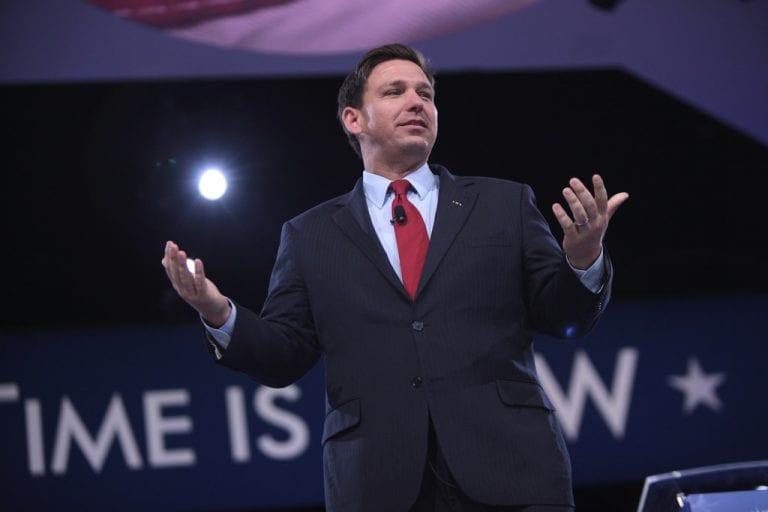 It’s official: Florida Governor Ron DeSantis is slated to a sign a bill that will make social media censorship ILLEGAL in the Sunshine State.

This means no more deplatforming, shadow banning, or outright censorship.

The move comes as DeSantis is widely considered to be the top choice as President Trump’s running mate, assuming Trump runs in 2024.

DeSantis is wildly popular in Florida, especially among minorities.

And his bill against social media censorship is something that anyone who LOVES freedom of speech should be able to rally around.

More details on this groundbreaking legislation below:

This is excellent news.

For too long, social media companies have been able to censor anyone without any true reason.

They have clear double standards, depending on political view point.

For example, many Antifa accounts that are openly calling for violence are still allowed on these platforms.

The New York Post has more details on the implications of this bill:

Social media companies would be unable to permanently kick people off their platforms under a tough new Florida law.

The bill, passed by the GOP-dominated state Legislature Thursday and awaiting Gov. Ron DeSantis’ signature, would make it a crime to remove state political candidates from Twitter and Facebook, and would mete out penalties of $250,000 a day for any statewide candidate who is deplatformed.

Removing more local candidates would cost the company $25,000 a day.

The bill also requires tech companies to give users seven days notice that they are at risk of being banned and offer them the opportunity to correct the issue. Suspensions of up to 14 days would still be allowed.

“What this bill is about is sending a loud message to Silicon Valley that they are not the absolute arbiters of truth,” GOP state Rep. John Snyder said Wednesday, NBC News reported. “What this bill does is send a loud message that the Constitution does not have an asterisk that says only certain speech is free and protected.”

Big tech advocacy groups have struck back saying the law would violate their First Amendment right to decide who can participate on their platforms.

Once again, the American people (in Florida) will be able to exercise their First Amendment rights online!

It’s no secret that the media is tilted against conservatives.

It’s also no secret that Big Tech is against conservatives.

Now, DeSantis is looking to level the playing field to ensure that these companies abide by their own rules.

They cannot deplatform anyone just because of political differences.

Honestly, we’re surprised that it took this long for a leader to take action.

But it makes sense that DeSantis, a favorite to be Vice President under President Trump, would lead the way.

The Hill has more details on this legislation:

The Florida House and Senate voted this week to pass legislation that would prohibit social media companies from banning politicians.

Fines for social media companies that try to ban politicians from their platforms could add up to $250,000 a day for statewide politicians and $25,000 a day for other elected officials, the Sun-Sentinel reported.

The bill, which still allows for politicians to be suspended for two weeks and for individual posts to be taken down if they violate the company’s policies, is now headed to Republican Gov. Ron DeSantis.

Opponents argue the measure is unconstitutional and that Republicans are only advancing it because former President Trump was banned from multiple social media platforms after he continued to spread false election conspiracy theories after the deadly Capitol riot.

“This bill is not about President Trump,” Rep. John Snyder (R) countered. “This bill is about the 22 million Floridians and their First Amendment rights.”

Net Choice, a trade group for internet companies, said during a hearing for the bill that the companies’ free speech rights were being violated.

“The First Amendment makes clear that government may not regulate the speech of private individuals or businesses. This includes government action that compels speech by forcing a private social media platform to carry content that is against its policies or preferences,” NetChoice President Steve DelBianco said.

So what do you think?

Do you approve of this bill?

Or is it too little, too late?

Let us know in the comments section below!

We’d love to hear your thoughts!