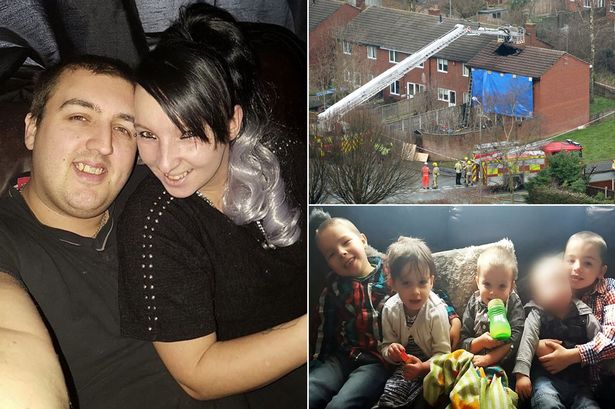 Social services had warned a couple about the dangers of smoking in bed before their four children died in terrible house fire sparked by a discarded fag.

It has been revealed that Natalie Unitt and Christopher Moulton had been warned by social services not to enjoy cigarettes in bed before the worst fears came true on February 5 last year.

After one of their parents’ cigarettes is thought to have set fire to bedding in the main bedroom, a fire tore through the house which claimed the lives of Riley Holt, 8, Keegan Unitt, 6, Tilly Unitt, 4, and Olly Unitt, 3.

The parents had been smoking in bed with the youngest sibling aged two at the time, also sleeping in their bedroom.

This meant he survived, along with his parents, who managed to escape the flames despite the fire originating in the main bedroom of the home in Sycamore Lane, Highfields in Stafford.

An inquest heard today how the fire started after the pair were smoking in bed but the parents disputed the findings of the emergency services.

Mr Moulton claimed the fire had begun in the gas boiler cupboard on the landing – a theory ruled out by a fire investigator.

The fire caused a “flash-over”, with everything in the main bedroom catching alight.

The flames then spread to the landing, which meant Mr Moulton was unable to reach the children asleep in the other bedrooms.

Giving evidence at the hearing, Ms Unitt said the first she became aware of the fire was when she woke up and felt a ‘heaviness’ in her chest. “I still have nightmares about it now,” she added.

But when pressed to describe what happened, she said she couldn’t recall as she suffers from post-traumatic stress.

He was asked at the hearing if he’d picked up a burning duvet to try to take to it the bathroom. “No, I didn’t,” he replied.

Mr Moulton jumped out of his bedroom window to escape, having passed their youngest child to Ms Unitt.

Leigh Richards, from West Midlands Fire Service, was called in to piece together what happened in the early hours of February 5 last year.

He said it appeared Ms Unitt had gone downstairs to get water to put out the blaze.

But the flames meant she was unable to get back upstairs so she fled out of a door.

A search of the charred remains revealed there had been more than 100 cigarette butts left lying around different rooms of the house.

One cigarette found in a window casement had not been stubbed out.

It emerged the couple had earlier been advised by social services against smoking inside their home.

Mr Richards said the remains of a glass ashtray was found, which appeared to have melted onto the mattress springs on their bed.

There had been three smoke detectors in the house. Yet the inquest heard that studies have shown children often don’t hear detectors go off, despite adults responding to the sound.

The four children all died in their beds from smoke and fire inhalation.

Detective Inspector Alan Lyford, from Staffordshire Police’s major investigations department, said there were discrepancies between Mr Moulton and Ms Unitt’s accounts and in relation to the evidence at the scene.

The couple were initially arrested and a file was submitted to the Crown Prosecution Service, although no further action was taken.

South Staffordshire coroner Andrew Haigh said: “My hope is the children died quite peacefully in their beds.”

He recorded a narrative conclusion, saying it was due to fumes from the fire caused by unextinguished cigarettes.

Mr Haigh will now be writing to the UK Government on the advice of the fire service. He said he would be asking for them to follow Wales’ lead and consider making ‘fire suppressant’ devices, such as sprinklers, mandatory in all new homes.

Maddow finds shocking fact about Capitol riot: “I don’t understand how this isn’t the headline!”