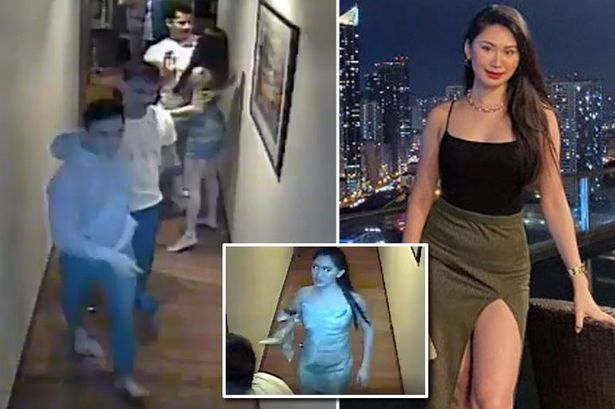 Harrowing news has been reported in Makati where a person who murders three or more people, usually in service of abnormal psychological gratification. A CCTV footage has shown the final moments of a young flight attendant before she was allegedly gang-raped and killed in a hotel room in the Phillippines.

According to Daily Star “ Poor Christine Dacera 23 years old, who was a young attendant by profession and was found dead in a bathtub

Following the investigation ”before her death, he checked in at the hotel with three male friends for a New Year’s Eve party. She is holding a glass of wine as several men follow her to the room.

Christine had been partying with at least 12 men, most of which were identified by police as gay, from the evening of December 31 until she was found unconscious in the morning

According to Makati police chief Colonel Harold, “she had bruises and scratches on her arms and legs with traces of sperm on her genitalia, which police claim is evidence of sexual assault and homicide.

He added: “The victim had lacerations and sperm in her genitalia. Only three of [the men] were Dacera’s friends.

“The others were practically strangers to her, as they were only known to her three friends.”

However, Christine’s family, as well as the Commission on Human Rights, will be conducting independent autopsy examination.

Her Instagram, under the username @xtinedacera, shows she last posted a week ago on December 28, leaning on the door of an aeroplane wearing PPE.

She captioned it: “Last flight for this one helluva year,” for her 12,800 followers.

Prince Charles fumed when Princess Diana fainted: ‘She could have done it quietly’