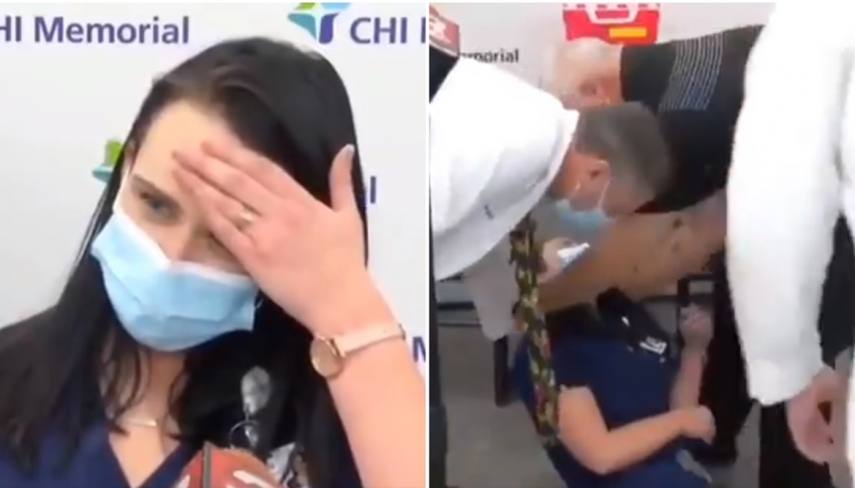 CLAIM: A nurse who was one of the first health care workers to be vaccinated for COVID-19 in Chattanooga, Tennessee, on Thursday passed out on live TV after getting the vaccine and answering questions about how safe it is.

AP’S ASSESSMENT: Missing context. Nurse manager Tiffany Dover did pass out after receiving her vaccine, but she explained to reporters afterward that she has a condition that sometimes causes her to faint when she feels pain. The United States Centers for Disease Control and Prevention says it has received reports of people fainting after nearly all vaccines, and scientists believe it is due to pain or anxiety associated with the vaccination process.

THE FACTS: Dover was one of the first five people to receive the Pfizer-BioNTech COVID-19 vaccine at CHI Memorial Hospital in Chattanooga on Thursday.

Several minutes later, reporters were filming Dover for an interview when she lifted her hand to her head, apologized, and said she was feeling dizzy. In the video, she can be seen fainting as doctors catch her and lower her to the ground.

The video was circulating widely without context on Twitter and Facebook on Friday, with some social media users commenting that they would not get the vaccine or claiming it was dangerous.

“Oh my, a nurse has passed out, after taking the Vaccine Live on air in the USA,” read a tweet. “This is becoming a complete farce. When will this nonsense end.”

These posts didn’t include the fact that Dover was back on her feet shortly after passing out. She told reporters with the local news station WTVC that she has a medical condition that can sometimes cause her to faint.

“It’s common for me,” she told reporters. “I feel fine now.”

Dr. Jesse Tucker, medical director of critical care medicine at the hospital, told WTVC reporters that vaccines can cause that reaction in some people.

“It is a reaction that can happen very frequently with any vaccine or shot,” he said. “No reason to suspect that’s due to the vaccine whatsoever.”

The CDC offers guidance on fainting after vaccination, which can be common. It says that although fainting has a variety of possible causes, “it is usually triggered by pain or anxiety.”

Fainting after a vaccine is most frequently reported after the HPV, MCV4 and Tdap vaccines, which are administered to adolescents, the CDC says.

As COVID-19 vaccinations roll out to more people nationwide, health officials are tracking their safety and watching for any unexpected side effects.

A sore arm or redness at the injection site are common side effects for many vaccines, including the Pfizer-BioNTech shot and a COVID-19 vaccine made by Moderna Inc. A fever and some flu-like symptoms, which are also common, indicate that the immune system is revving up.

The FDA found no serious side effects in the tens of thousands enrolled in studies of the two vaccines.

This is part of The Associated Press’ ongoing effort to fact-check misinformation that is shared widely online, including work with Facebook to identify and reduce the circulation of false stories on the platform.