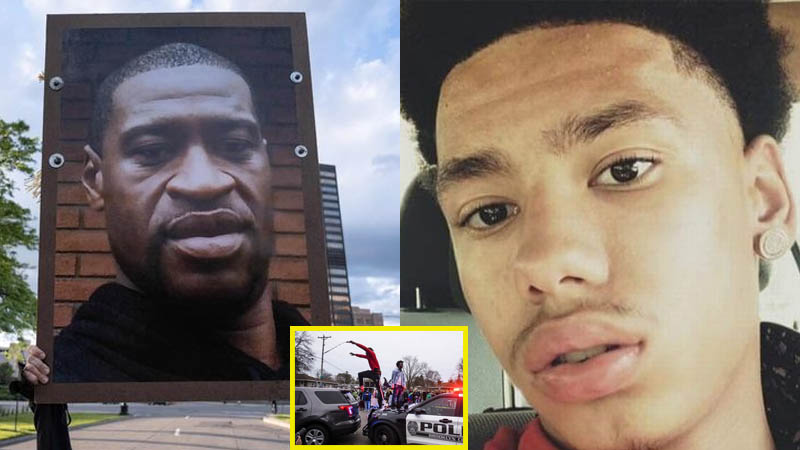 The shooting of a young black man in Minneapolis was ‘accidental’ and caused by an officer opening fire with her gun instead of a Taser, the city’s police chief said.

Daunte Wright, 20, died after the shooting in Brooklyn Centre, Minneapolis, just 10 miles from the courtroom where ex-officer Derek Chauvin is being tried for killing George Floyd.

Mr Wright’s devastated mother said her son told her he was pulled over because he had air fresheners hanging in his back window.

Brooklyn Centre Police Chief Tim Gannon told a news briefing that a routine traffic stop escalated into a deadly confrontation when officers ran a check on Mr Wright’s expired vehicle registration and found an outstanding warrant for him.

Police video footage presented at the briefing showed an officer trying to handcuff him next to the car, before Mr Wright broke free and got back inside.

At that point, a second officer yells, “Taser, Taser, Taser,” before firing a single shot from her handgun.

“Holy shit, I just shot him,” the policewoman is heard to shout as the car rolls away with Mr Wright still in the driver’s seat.

The car travelled some distance before striking another vehicle and coming to a stop.

Tim Gannon said the investigation was in its early stages but based on evidence reviewed by the police, the shooting appeared accidental.

The unidentified officer who shot Wright was placed on administrative leave.

“This appears to me, from what I viewed and the officers’ reaction and distress immediately after, that this was an accidental discharge that resulted in the tragic death of Mr. Wright,” he said.

The grief-stricken family have gone on to describe him as a good-natured father who worked multiple jobs to support his two-year-old son.

They rejected the claim that an accidental shooting was to blame for his death on Sunday.

“My brother lost his life because they were trigger happy,” his older half sibling, Dallas Wright, told a crowd of hundreds gathered for an outdoor memorial vigil on Monday night at the Brooklyn Centre.

“My heart is broken in a thousand pieces… I miss him so much, and it’s only been a day,” Daunte Wright’s mother, Katie Wright, said as she wept. “He was my life, he was my son and I can never get that back.

Defying a curfew imposed earlier in the day by Governor Tim Walz following a night of unrest on Sunday, scores of people headed from the vigil to join hundreds of demonstrators assembling outside the Brooklyn Centre police station in a steady downpour as darkness fell.

The crowd surged up against a makeshift fence erected to keep protesters at bay.

Some demonstrators threw bottles and other projectiles as police responded by firing what appeared to be non-lethal plastic rounds.

Mr Wright was slain just 10 miles from the courthouse where a former Minneapolis police officer, Derek Chauvin, has stood trial over the past two weeks on murder charges in the deadly arrest last May of George Floyd, a 46-year-old black man.

Mr Floyd’s death, captured by an onlooker’s mobile phone, showed his neck pinned under Chauvin’s knee, and sparked months of protests and unrest in cities across the US over racial injustice and police brutality.

Unrest flared up again in Brooklyn Centre after Mr Wright’s killing, with riot police on Sunday night firing teargas and rubber bullets to disperse protesters, some of them throwing rocks, bags of rubbish and other projectiles.

President Joe Biden has urged a “full-blown investigation” of Mr Wright’s death and appealed for protests to remain peaceful, while also condemning lawlessness.