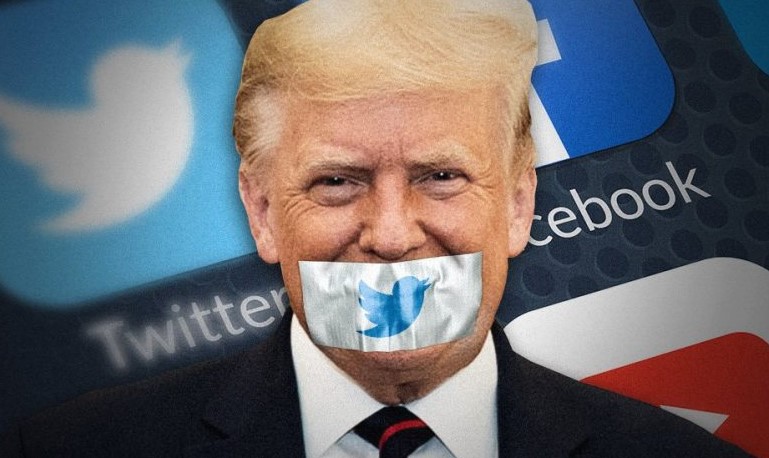 Big Tech companies represent private entities, so they can do whatever they want on their platforms. We always hear this sentence from the left!

Does that mean that by that rule, the Dems can censor conservatives’ posts there, aiding Dems in their aim to steal the election?

Among the enigmas of the Presidential election in 2020 was the Big Tech companies’ standard to suspend the most influential public figure, Trump!

It was a public secret that they did it, but no one knows how they did it!

We have some hints finally.

In the 2020 election, the backstage conservations between a state government, a Biden-connected company, and Big Tech companies were revealed by Judicial Watch.

See the tweets below.

No one was surprised that it was the state of California!

According to Trump, they represented a liberal cesspool interested in their woke agendas and nothing more.

I think it’s about time for the GOP senators to do their job and repeal Section 230.

The Epoch Times has more details.

The findings come after Judicial Watch received 540 pages and a further four pages of documents from the office of the Secretary of State of California in response to an open records request, the group said.

It had filed the request after a December 2020 report surfaced revealing that California’s Office of Election Cybersecurity had surveilled and asked the social media giants to remove or flag as “misleading” at least two dozen messages.

The company did this by sharing its “Misinformation Daily Briefings” with California officials, who then passed them on to social media giants Facebook, Twitter, and Google for dissemination, according to Judicial Watch.

“These new documents suggest a conspiracy against the First Amendment rights of Americans by the California Secretary of State, the Biden campaign operation, and Big Tech,” Fitton said.

These leaked documents blow up the big lie that Big Tech censorship is ‘private’—as the documents show collusion between a whole group of government officials in multiple states to suppress speech about election controversies.

Judicial Watch, a government transparency watchdog group, announced Tuesday that it has obtained documents allegedly showing California officials colluding with social media giants to censor speech surrounding the 2020 elections – including some of its own posts.

The group also said a communications firm linked to the Biden campaign played a role in determining which posts should be censored by creating “Misinformation Daily Briefings” that the officials shared with Twitter, Facebook and Google.

“These new documents suggest a conspiracy against the First Amendment rights of Americans by the California Secretary of State, the Biden campaign operation, and Big Tech,” said Judicial Watch President Tom Fitton. “These documents blow up the big lie that Big Tech censorship is ‘private’ – as the documents show collusion between a whole group of government officials in multiple states to suppress speech about election controversies.”

Judicial Watch said it received more than 500 pages of documents from California’s Secretary of State as part of a public records request stemming from a December report that the state’s Office of Election Cybersecurity had been monitoring social media posts and had successfully asked Big Tech to remove or flag at least two dozen messages.

In one instance, YouTube allegedly removed one of Judicial Watch’s own videos after a California Secretary of State official reached out to the video-sharing platform and sought to have it flagged as misleading.

SKDKnickerbocker, a communications firm tapped by the Biden campaign, targeted Judicial Watch in one of its misinformation briefings, taking issue with a tweet from Fitton that read, “Mailing 51 million ballots to those who haven’t asked for increases risk of voter fraud and voter intimidation.”

The released documents can be viewed on Judicial Watch’s website.

I can claim that one Twitter user shared what we think! I don’t believe that someone was shocked by this news.

The surprising thing is how long this has been going on, and no one took any action. The Dems tried to sacrifice our rights to free speech so they can do the fraud.

What do you think, how far they can reach?

You can read more tweets below.

If you have some doubts about Twitter’s involvement, don’t. Of course, it was.

The self-centered GOP senators have to start working and deserve their salary.