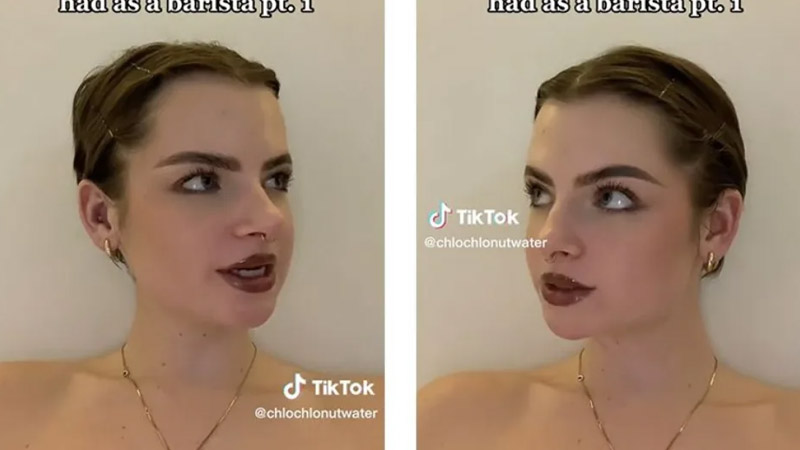 A TikToker and barista Chloe (@chlochlonutwater) tweeted a TikTok about the most ridiculous encounters she’s had with clients, and it struck a chord with present and past service industry workers.

Given the number of interactions baristas have with clients on a daily basis, some are going to be interesting. Chlo likes her profession, but she’ll be the first to admit that it comes with the danger of strange and unpleasant client interactions. Chlo re-enacts a few highlights from her portfolio of weird client experiences in a new TikTok video, and viewers with service industry experience can fully identify.

The first segment, titled “The Peach Pear Apricot Smoothie,” starts with a front-facing view of Chlo playing both herself and the client. “Umm, excuse me, this tastes really bad … like really bad,” the customer says, dumbfounded.

“Oh, that’s so weird. What does it taste like?” Chlo asks apologetically, to which the customer replies, “Peaches. I hate peaches.” Chlo explains to her customer that the beverage they ordered was a peach pear apricot smoothie, “So it would taste like peaches, a little bit.”

“I want a different drink. I hate peaches,” the customer declares. Trying to accommodate the customer, Chlo asks if they’d like a four-berry smoothie. “What’s in that?” the customer asks suspiciously. Choosing her words carefully, Chlo replies, “Just the four berries. Like, um, blueberry, blackberry, raspberry, and strawberry,” before the customer closes the scene with a “Yeah, sure.”

When customers ask about ‘reward points

“Reward Points,” the second chapter in Chlo’s strange customer interactions series, is about a client who has 14 reward points but needs 50 to earn an award. However, the narrative twists when the client wants their reward despite the fact that they do not have enough points.

Other performances include “The Beverage That Wasn’t Hot Enough,” “The Milkshake With No Milk,” “The Patron Who Didn’t Know That Espresso Is Coffee,” “The Customer Who Wanted To Know If the Muffins Topped With Sliced Almonds Were Nut-Free” and “The Iced Mocha Mistaken for a Hot Latte.”

Viewers could relate to the barista’s conversations

Chlo’s amusing performance hit home with many current viewers who have worked with customers. “I work in a vet hospital. Someone called me to ask me what gender the stray cat on their porch was… [OVER] THE PHONE,” one user shared.

“Sometimes, when I have convos with people like this over the phone, I just have to sit in silence with them to process what they said,” one viewer mentioned. “It’s kind of ironic that baristas deal with crazy on a daily basis, but baristas give me my sanity in a cup every morning,” noticed one kind TikToker.