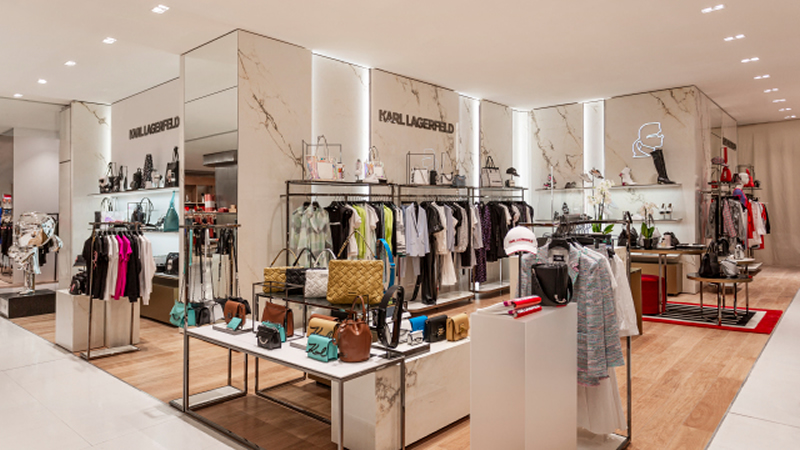 Nearly 40 percent of sales came via online channels, and shoes and men’s categories powered ahead.

Reconfigured a decade ago as a digitally driven brand in the “masstige,” or affordable luxury, category, the Karl Lagerfeld company is fulfilling its promise rapidly.

“Close to 40 percent of our overall business is conducted via online channels, and this fiscal year, we see this growing to probably close to 50 percent,” said Pier Paolo Righi, chief executive officer of the Karl Lagerfeld brand. “During the pandemic, we have been able to connect and interact with our consumer, and also conduct sales.”

Thanks to its advanced digital capabilities, “we were able to weather the storm much, much better than we anticipated,” he said, disclosing that revenues for the fiscal year ended March 31, which captures the brunt of store closures and lockdowns linked to the coronavirus crisis, dipped only 4 percent.

He declined to give precise figures, but said revenues doubled in the company’s first quarter ended June 30 versus the same period in 2020. “We are definitely back to levels of 2019,” he said during a video call, framed sketches by the late designer arranged on the wall behind him.

Marking his 10th anniversary at the brand this month, Righi sounded upbeat as he forecast 30 percent growth for the current fiscal year, and cited strong momentum with an array of categories, particularly footwear — growing in the high double digits — and men’s wear. He noted men’s categories overall are approaching about 20 percent of the business.

Leisure and sport-inspired categories also fared well during the pandemic, with a strong kickoff for its new ranges of underwear and loungewear, the executive noted.

He trumpeted a positive consumer reaction to its collaboration with model and sustainability campaigner Amber Valletta on a capsule range of eco accessories made with cactus leather and organic cotton. A second product range, to include apparel, is in the works for spring 2022, as reported.

About a dozen new Karl Lagerfeld stores opened last year with franchise partners which “looked beyond the pandemic,” Righi said. “This mindset has helped us a lot.”

The company ended the year with about 250 stores and franchises globally, with roughly 20 more locations planned for the coming calendar year, with an emphasis on China, along with several projects in Russia and the Middle East, he noted.

During the pandemic, Righi described business in Europe as stable, and “very difficult” in the U.S. “But we believe that this fiscal year we can come back to 2019 levels,” he said. Meanwhile, business in China rebounded quickly.

Karl Lagerfeld, which is headquartered in Amsterdam and Paris, counts about 500 employees, plus another 500 engaged by its joint venture and franchise partners.

The CEO noted that the company retained all its employees, topping up salaries to 100 percent for any furloughed retail workers. “We work as one team, and one family,” he said.

In fact, Righi decided to broaden his management team and late last year brought in Christopher Todd as head of global digital sales. Todd has also worked for Nike, Toms, VF Corp., Quiksilver and Patagonia, according to his LinkedIn profile. “He will help us to to lead the digital agenda, drive our Karl.com business, marketplaces and everything thing along with it,” he said.

Righi hinted that Sébastien Jondeau, an ambassador, consultant and sometime model for Karl Lagerfeld men’s wear, would take on a bigger role at the company. Jondeau was the late designer’s longtime bodyguard and personal assistant, recently penning a book about his experiences and their complicity.

Among other corporate projects, Righi changed the company’s logistics supplier to Bleckmann and took the jewelry category back in-house. “Karl has been very much the master of accessorization and very close to jewelry himself, so it’s an integral part of our DNA,” he noted.

The company also plans to take its denim business in-house in 2022.

Among future projects are a luxury residential project in the Mediterranean region, and a leap into NFTs, a technology that assures the authenticity of an original digital asset, like a music file, video or image.

Michel Miglionico to grace Miss Seychelles.Another world 2012 to be held in Seychelles

Black dresses stay in Style in all Shapes and Sizes