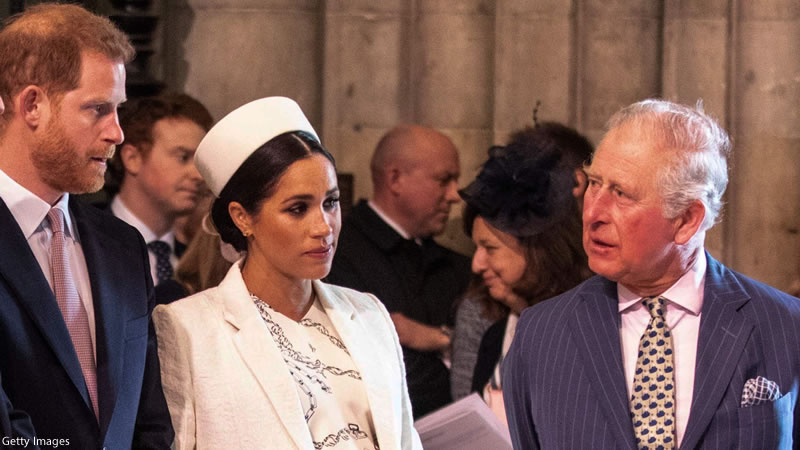 During Prince Harry and Meghan Markle’s visit to London for Queen Elizabeth II’s Platinum Jubilee, there were many moments that left people in wonder.

The biggest insult of them all, though, seems to have been the one that hurt the power couple the most.

At the St. Paul’s Cathedral Thanksgiving Service for Queen Elizabeth, Prince Harry and his wife were there. Her Majesty was unable to attend due to her mobility issues.

At the religious ceremony, however, various members of the British royal family filled in for The Queen. Prince Charles, Prince William, and Kate Middleton were among them.

The two successors to the monarchy were caught on camera, as was Kate Middleton doing an awkward dance to avoid Prince Harry and Markle as they entered the church, as per People Report.

Prince Charles and Kate Middleton were seen having a heartfelt moment before settling into their assigned seats away from Prince Harry and Markle.

Following their discussion, Middleton was kissed by Prince Charles, Prince Harry’s father. The Duchess of Cambridge was observed giggling after being moved by the gesture and then turned to leave.

The biggest criticism of the trip came this week when a royal expert decided to focus on the charming display of affection and claimed that Markle and Prince Harry felt excluded.

According to royal experts, this left Harry and Meghan feeling hurt.

He explained: “According to a very good source, that’s one of the things that Harry and Meghan now feel very slighted by. [This is] because of what Prince Charles did in the Cathedral.”

Sean added: “In fact, some are saying, [this] is the biggest insult that they’ve received since they departed, of course, and decided to become Megxit.”

The royal analyst went on to say that since Prince Harry had already made their bed (with the scandalous interviews), now they must lie in it.

The commentator shared: “As I’ve said many times, you threw down the gauntlet. You said all of those things on TV. Prince Charles, the Queen, Prince William, [the] Duchess of Cambridge, however, Sophie Wessex, are entitled to react in any way that they wish after what went before.”

He also stated: “Prince Charles, Catherine, William, Harry, and Meghan was there really a bigger insult than that. I would just say that it was an off-the-cuff thing that Prince Charles did, and perhaps [he] just never thought about it as they [William and Kate] were right there in front of him.”

He concluded by saying that Prince Harry’s anticipated memoir, which is set to be released later this year, will decompose the public dig.

Sean explained: “[And] why should he, given what they’ve done to him. So fast forward, it looks like this particular slight could end up being one of the biggest talking points in Prince Harry’s book.”

It is unknown if Prince Charles’s gesture was an innocent mistake or an intentional dig at Markle and his son.

Prince Charles seemed to have regretted his behavior and his lack of connections with Markle and Prince Harry while they were visiting the UK.

Prince Charles made up for his mistakes by sharing an emotional photo of his two sons on Father’s Day.

It was seen as an olive branch by many royal officials.

The five stimulus checks and direct payments worth up to $1,700 going out in July

Robert Pattinson Reveals His Thoughts About Villains In Batman Sequel