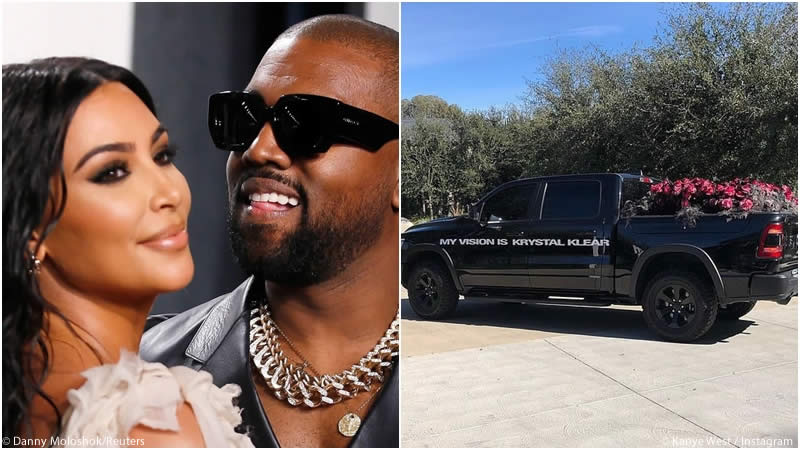 Despite first appearances, the truck branded “MY VISION IS KRYSTAL KLEAR” came up to the Kardashian estate and is not an advertisement for Specsavers. Instead, it was a ploy to get back his children’s mother, who is currently dating SNL’s, Pete Davidson.

West also took to Instagram to share the flower delivery, writing “MY VISION IS KRYSTAL KLEAR” once again amongst numerous rose emojis. The post has since been removed, and a reminder of the rapper’s Donda 2 album has taken its place.

As per Joe, West was calling it off with actress and model Fox just hours before he delivered this romantic gesture to his ex.

In yet another social media post, West wrote: “I DON’T HAVE BEEF WITH KIM I LOVE MY FAMILY SO STOP THAT NARRATIVE IM NOT GIVING UP ON MY FAMILY.”

Despite stating that he has no beef with Kim, the 41-year-old reality star said that her date night coat with Davidson was a present from him for her appearance on Saturday Night Live in October 2021. Kim was seen out on a date with Davidson wearing the $23k Balenciaga coat.

West wrote, “I BOUGHT THIS COAT FOR KIM BEFORE SNL I THOUGHT IT WAS PARTICULARLY SPECIAL I HAVE FAITH THAT WE’LL BE BACK TOGETHER.”

His post continued with: “WE HAVE A PUBLIC RELATIONSHIP BECAUSE WE ARE PUBLIC FIGURES SO TO THE PUBLIC AND TO THE PRESS SOMETIMES PEOPLE CALL ME CRAZY BUT TO BE IN LOVE IS TO BE CRAZY ABOUT SOMETHING AND I AM CRAZY ABOUT MY FAMILY HAPPY VALENTINES.”

Not long after that post, West held down the caps button once again to write: “THANK YOU GUYS FOR YOUR SUPPORT OF MY FAMILY MY FAMILY MEANS MORE TO ME THAN ANY OTHER ACCOMPLISHMENT IN LIFE.

“IF ANYONE LOVES ME AND MY FAMILY IF YOU SEE SKETE IN REAL-LIFE SCREAM AT THE LOOSER AT THE TOP OF YOUR LUNGS AND SAY KIMYE FOREVER.”

Robert Pattinson Reveals His Thoughts About Villains In Batman Sequel

Harry Styles: Why He Decided To Break Up With Kendall Jenner