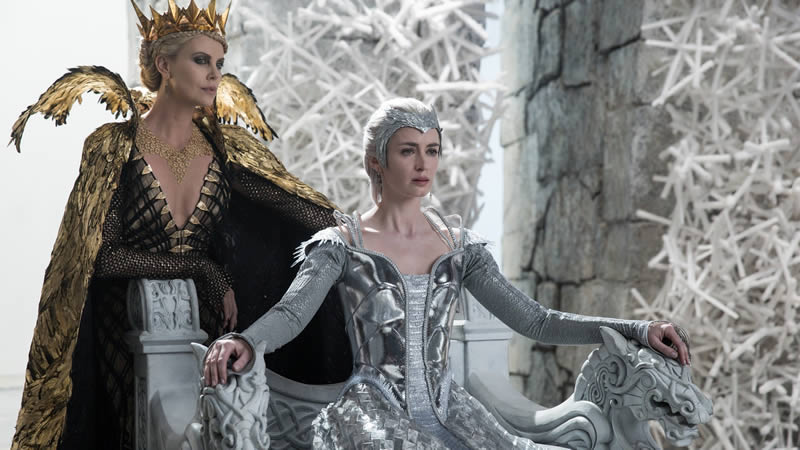 In many respects, The Huntsman: Winter’s War, producer Joe Roth’s follow-up to 2012’s Snow White and the Huntsman, is a slicker, more accessible, possibly more commercial film than its predecessor. And yet there’s something ineffably dispiriting about it.

Derided before anyone saw a still as the sequel-prequel-whatever that nobody really wanted, it’s passably entertaining, and like the last one breathtakingly crafted, especially Colleen Atwood’s microscopically detailed costumes.

But it still carries the sulfuric whiff of a changeling creature, a serviceable vehicle bolted together from remnants, if you can say that of an expensive package that includes Chris Hemsworth, Charlize Theron, Emily Blunt and Jessica Chastain in its cast. Although literally brighter and more sunlit than Snow White, the absence of key talents casts shadows over its surface. Snow White’s original director Rupert Sanders, currently filming Ghost in the Shell, was replaced by writer-director Frank Darabont (The Walking Dead). Creative differences saw off the latter, and so the director credit now goes to Cedric Nicolas-Troyan (he was the VFX supervisor on Snow White and the Huntsman and second-unit director on Maleficent).

Obviously, the most palpable absence is that of Kristen Stewart’s Snow White, gone probably not because of her much-hyped extramarital affair with Sanders but because the actor would have been perhaps too expensive for this installment, according to some sources. It’s not hard to figure out how Universal and Roth did the math to work out they didn’t need Stewart, especially now that Hemsworth, barely a blip on the tracking data in 2012, is such a huge deal on the back of his work in the Marvel universe.

Whichever way you add it up, it’s not just a significant loss, but an ironic one: Isn’t part of the appeal of fairy tale rejigs like Snow White and the Huntsman, Maleficent, Into the Woods, the TV series Once Upon a Time and, going back to a cornerstone work, Angela Carter’s short stories in The Blood Chamber that they offer a feminist or at least female-centric twist on traditional (and often traditionally misogynistic) material? So in 2016, after all the debates about disparate pay, the Bechdel test, the paucity of female filmmakers and female lead characters in mainstream filmmaking, #AskHerMore and all the rest, isn’t it kind of depressing that one of the few big-budget franchises of the last five years to feature a woman protagonist has literally written her out of her own eponymous story in order to make some guy the star of the show? It’s as if Lionsgate and Co.

Had decided to get rid of Katniss after the first The Hunger Games movie in order to focus on Liam Hemsworth’s Gale instead because Jennifer Lawrence was too expensive. The excision must have not sat right with someone on the team because as if to “right” the gender imbalance and make up for the absence of Snow White herself, The Huntsman: Winter’s War borrows from the Disney/Once Upon a Time playbook of mix-and-match storytelling to introduce a character from a completely different fairy tale: the Ice Queen, that iconic figure from Frozen… sorry, Hans Christian Andersen.

It turns out that Ravenna, the evil queen played by Theron in Snow White, had a sister named Freya (Emily Blunt) as well as a brother whose existence wasn’t mentioned in the first film. In the extended prequel portion of the story, we learn how originally gentle Freya, along for the ride while Ravenna rehearsed her black widow routine on previous kings, got her magic frosty freak on after her nobleman lover (Robert Wilfort) seemingly burnt their infant daughter alive in order to get out of marrying her.

Having developed post-traumatic ice-generating power, Freya sets herself up in a kingdom in the north, determined to use her army of abducted child soldiers to wipe out romantic love everywhere. Two of her early conscripts are Scots-accented Eric (Conrad Khan, later Hemsworth) and Sara (Niamh Walter who, like Khan to Hemsworth, is exceptionally well cast or made up to look like someone who would grow up to be Jessica Chastain). Despite the brutal conditions of Freya’s army, called the Huntsmen, the two fall in love. However, when their passion for one another is discovered, Freya separates them with a wall of enchanted ice through which Eric sees Sara being killed by their friend and fellow soldier Tull (Sope Dirisu) — hence Eric’s identification of himself as a widower in the first film.

Seven years pass, according to the subtitles and, by implication, in that time all the events of the previous movie happen. In The Huntsman’s present, Snow White (only her back is seen), now married to William (a briefly returning Sam Claflin), is disturbed by the malign influence of Ravenna’s magic golden mirror around the castle. It falls into the hands of CGI goblins (pleasingly gorilla-like) and Eric is dispatched to retrieve and destroy it. Assisting him in this endeavor will be Nion (Nick Frost), one of the seven-to-eight dwarves met in the earlier installment, and Gryff (Rob Brydon), who supposedly are brothers even though they have completely different regional British accents.

Gender parity is achieved when Eric meets someone from his past and the troupe is joined by Mrs. Bromwyn (Sheridan Smith) and Doreena (Alexandra Roach), two female dwarves whose snappy, caustic banter with Nion and Gryff provides credibly entertaining comic relief, thanks especially to Smith and Brydon’s piquant timing and easy chemistry with each other.

They, at least, look like they’re having a bit of a laugh, but that doesn’t feel like it’s the case for the actors playing the non-dwarf characters. Hemsworth and Chastain — who, incidentally, have absolutely zero chemistry as a couple — both seem defeated and miserable, and don’t even get to have the fun Theron and Blunt enjoy goggling their eyes while looking villainous at various points throughout.

Plus, the latter two get to model some of the very best creations to come out of Colleen Atwood’s atelier, proper exhibition-worthy works of art that are the stuff of costume fans’ wildest dreams. Like her work for the many Tim Burton films she has costumed for, as well as the film musicals for Rob Marshall (Chicago, Nine, Into the Woods), these gowns are insanely detailed and 4K-ready down to the tiniest sequin and fake headdress feather, set off beautifully by Luca Vannella’s fittingly intricate make-up and hair designs (which will in themselves launch a thousand how-to YouTube clips on braidwork). When the knives are drawn at the end, and CGI lets rip with the climactic destruction, it’s like a cross between Kinji Fukasaku’s Battle Royale and RuPaul’s Drag Race. But surely something has gone very wrong with a film when viewers feels more invested in the costumes than the characters.

Did You Know? Keeping Up With The Kardashian Was Just A Filler Show Initially, Khloe Kardashian Reveals Details!