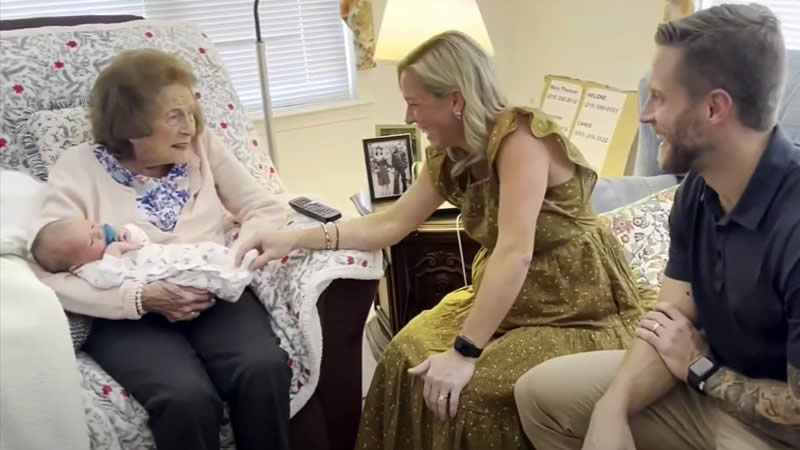 “I’m just thinking about how lucky I am,” said Marguerite Koller, who also has 11 children and 56 grandchildren

A woman from Pennsylvania is celebrating two major milestones in a couple of months.

According to NBC Philadelphia, Marguerite Koller of Blue Bell recently welcomed the birth of her 100th great-grandchild, Koller William. Shortly before her 100th birthday, the 99-year-old got to meet the baby boy.

“I’m just thinking about how lucky I am,” she said while holding her newest great-grandkid, who is named after her and her late husband, William.

Marguerite has credited William with convincing her to ditch plans to become a nun.

“I actually applied when I was a junior in high school but he talked me out of it,” she told ABC station WPVI-TV in 2015.

The new baby was supposed to be her 99th great-grandchild, but he earned the title after arriving more than a week after his expected due date.

Christine Balster, Marguerite’s granddaughter and mother of the 100th great-grandchild, said she and her husband Patrick decided to name their baby after both of her grandparents.

“My husband liked the name Kole, and it felt very natural to name him Koller and William as the middle name,” she told NBC Philadelphia.

Baby Koller now joins multiple generations that descend from his great-grandmother Marguerite, whom Christine described as a “lovely, sweet [and] strong lady.”

Marguerite’s family recognized her as “an inspiration” in a 2015 WPVI-TV report.

“And to be the age she is and still going about it every day,” said Greg Stokes, Koller’s grandson, “it’s unbelievable.”