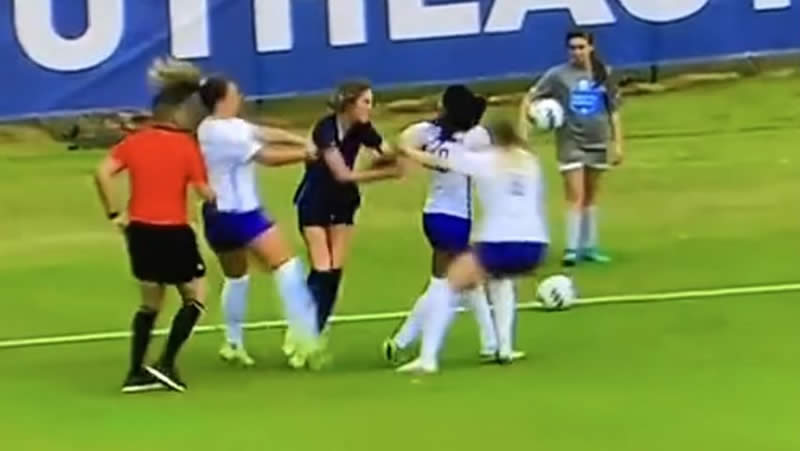 There was a fight in Louisiana, followed by a soccer match on Sunday afternoon.

Ole Miss and LSU women’s soccer players engaged in anything but a “friendly,” resulting in red cards and ejections.

And you thought football teams didn’t get along…

It all happened during the second overtime of Ole Miss’ eventual 3-0 shootout win. Maya Gordon of LSU attempted to steal the ball from the Rebels’ Ramsey Davis, who was not pleased with her opponent’s defense. Davis grabbed Gordon’s waist, and before you knew it, fists were flying in an SEC love fest.

Watch the action unfold below:

These ladies were on a mission! NBA wannabes could learn a thing or two from this haymaker-throwing trio. This was no time for chirping; it was all business. Fists collide with faces.

If you didn’t notice, another LSU player got involved in the Gordon-Davis brawl. That was Rammie Noel, who showed how to defend a teammate. Despite the fact that a nearby coach was already pulling Gordon away from the scene, Noel ran across the pitch and made her way to Gordon for a few love taps of her own.

Sunday’s melee lasted only a few minutes before the order was restored.

Gordon, Davis, and Noel were all given red cards and ejected from the game as a result of the fight.

A post shared by The Athletic Collection LSU (@lsu.tac)

Ole Miss And LSU Will Be Shorthanded

Both the Tigers and the Rebels will be forced to play without the women involved in the fight due to the players’ ejections. Noel and Gordon will miss LSU’s first-round NCAA Tournament game. Meanwhile, Davis will miss the Rebels’ second-round SEC Tournament match.

Prince Harry Is ‘The Case Of The Boy Who Cried, Wolf”