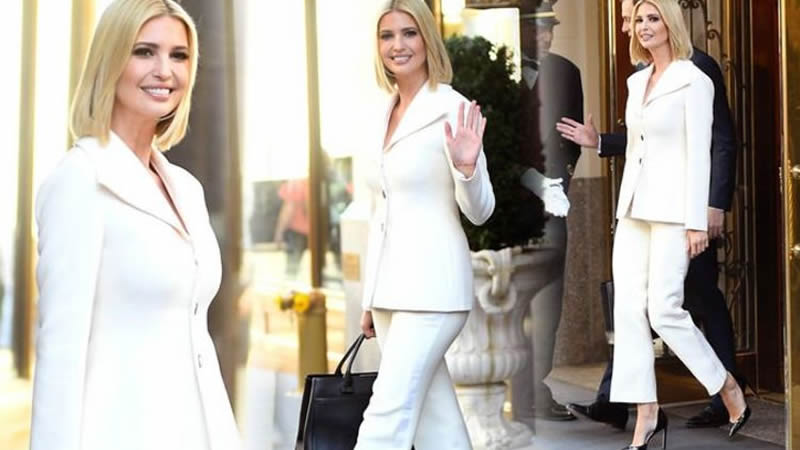 Ivanka joined her family for an extended stay in Florida after the Trumps departed Washington D.C. following the end of Trump’s term in office. Ivanka sported a white rolled-sleeve blouse layered over her dark-wash skinny jeans.

The fashionable personality accessorized with a straw wide-brim hat to match her outfit. She also sported a pair of black espadrilles that featured a squared vamp with soft uppers and a rope-style outsole, Footwear News reported.

Ivanka’s husband stepped out with a dad-style look. The investor and real estate developer donned a New York Mets cap, collared shirt and khaki pants. For his footwear, Kushner opted for black and white sneakers by Mizuno.

Ivanka often prefers pumps for formal occasions with her go-to picks from brands like Gianvito Rossi, Jimmy Choo and Burberry. Meanwhile, her go-to heels are usually from Brandon Maxwell and Altuzarra. She also sometimes steps out wearing more affordable footwear from Rothy’s flats and Gola for J.Crew sneakers. When it comes to fashion and apparel, Kushner’s wife prefers major labels like Chanel, Dolce & Gabbana, and Oscar de la Renta.

Ivanka and Kushner’s outing happened amid Trump’s second impeachment trial in the Senate. Trump is facing charges of inciting the insurrection at the U.S. Capitol on Jan. 6 that led to five deaths and dozens of arrests. Trump was mocked by several celebrities for his second impeachment.

“I didn’t even know you could be impeached twice. I thought it was like dying,” wrote Chrissy Teigen, who is an open critic of the former president.

“Trump will have the legacy of doing a really great job of getting impeached. Better than any other president. That’s a perfect biggley accomplishment!” “Modern Family” star Jesse Tyler Ferguson tweeted.

“An unprecedented moment – Donald J. Trump is officially the only US president to be impeached twice. #breakingnews,” Katie Couric wrote.