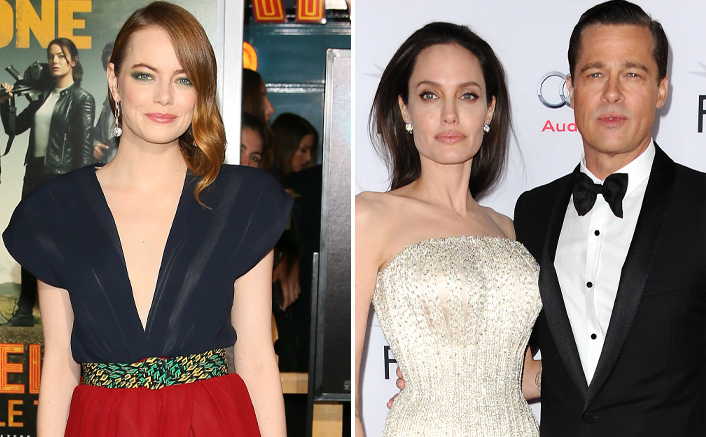 Brad Pitt and Angelina Jolie were one of the most talked-about couple of Hollywood. So much so that even many years after their split, people cannot stop talking about the gorgeous couple. Well, this time we have Emma Stone who made some fun revelation about Brangelina when they met her mother.

To promote her upcoming movie The Croods: A New Age, Emma made a fun virtual appearance on The Tonight Show Starring Jimmy Fallon.

During the interview, Jimmy Fallon spoke about the hit 2010 film Easy A, which was Stone’s breakout role and even earned the 32-year-old actress a Best Actress – Comedy or Musical nomination at Golden Globes 2011. The actress also shared a fun story around Brad and Angelina. Continue reading further to kn wo more.

Talking about her experience of attending the Golden Globes as a nominee, Emma Stone recalled how she took her mom Krista Stone to the award ceremony. The mother-daughter duo was seated next to Brad Pitt and Angelina Jolie, who at the time were still the ultimate power couple Brangelina.

“I went with my mom. That was my first time going to the Golden Globes. It was very, very, very exciting, and so I took my mom with me. And I feel like I’ve already told this story before, but we sat next to Angelina Jolie and Brad Pitt,” the La La Land star recounted.

“Oh, my God. We were like, ‘Of all people to be sitting next to at that kind of a show, whoa.’ And my mom never drinks and she had champagne that night, which was, you know, probably not the best idea, but she was having a wonderful time,” Emma Stone quipped about her mom.

“And she [Emma’s mother] started asking Angelina Jolie, like, ‘Do you have kids? Do you have kids? Are you, like — What do you guys — So you –‘ And I was like, ‘You have got to be gotta out of your [ mind].’ She completely knew, but she was, like, making small talk about the kids.

WARNING: Why COVID-19 vaccine could become a HUGE failure, according to environmental health scientists

Prince Harry’s Explosive Memoir Handed In, All Set To Ruin The Royals’ Christmas