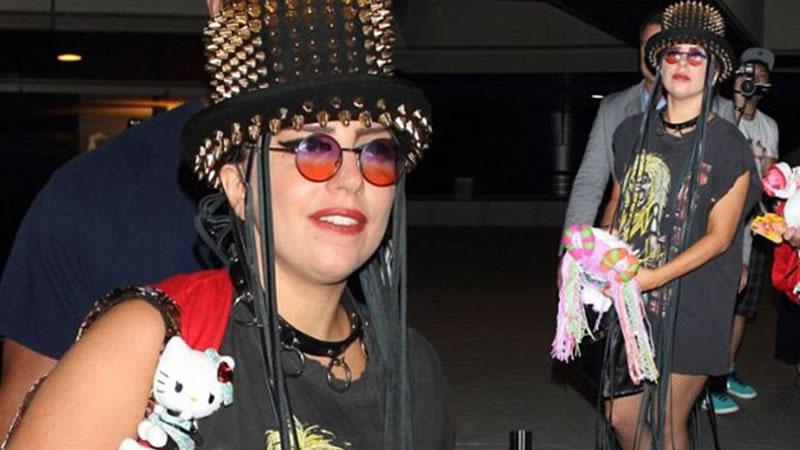 From disco Aphrodite to gothic maiden, Lady Gaga has certainly been pulling out all the ARTpop for her trip to Tokyo. And she gave her fans something to cheer about as she stepped out of the Shabu-Zen restaurant wearing an Iron Maiden T-shirt with a gold studded top hat and what looked like leather dreads coming from beneath her chapeau.

Adding a pair of round coloured sunglasses, a leather collar and black platform sandals, Lady Gaga was laden with gifts from her Tokyo fans gathered outside the eatery. She was presented with some cuddly Hello Kitty soft toys and happily posed for photos with some of the excitable fans on Monday night. Gaga certainly made an entrance when she arrived at Narita International Airport in Japan earlier in the day.

The Bad Romance singer was greeted by a fan frenzy as she rocked up in a semi-sheer body stocking – and very little else. Giving the illusion of being nearly naked, she raised eyebrows amongst both her ‘Little Monsters’ and airport staff. The New York-born star wore the bejeweled outfit as she disembarked the plane and was guided through the arrivals terminal by two bodyguards.

Despite wearing huge platform boots and an ‘up do’ of dreadlocks, she was still shorter than them both. The body-stocking was emblazoned with a variation of shell details, including two strategically-placed ones of her chest. It also featured starfish and seaweed designs.

How To Style a Side Braid

Natural Ways to Get Glowing, Beautiful Skin at Home