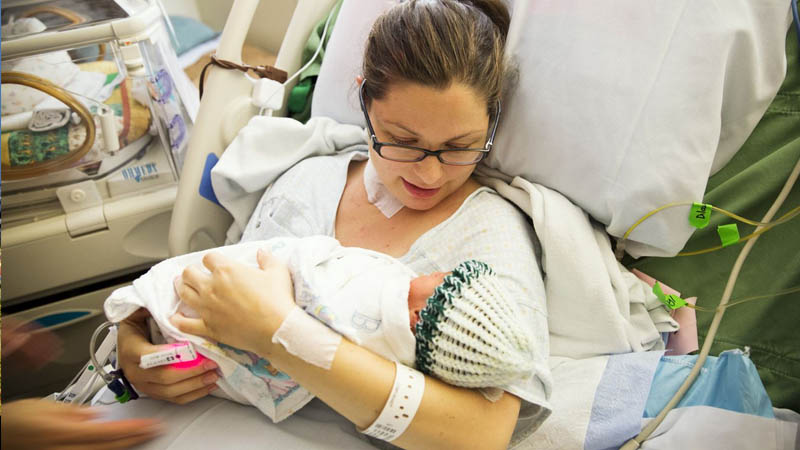 Pregnancy is exciting — and each year, thousands of women give birth in the U.S. without a hitch thanks to good doctors, modern medicine, and decent aftercare. But there are huge concerns for expectant mothers many don’t know about. In fact, USA Today explainsdeath during childbirth is on the rise in America, and reporters have found the U.S. is the most dangerous developed nation to give birth in.

The USA Today report explains over 50,000 women are severely injured during childbirth each year, and about 700 die. Scarily enough, these numbers are on the rise — and it appears that about half of these deaths could be prevented altogether. A graph provided by the publication notes most developed nations have seen a drop in maternal injuries or deaths from 1990 to 2015. In 2015, maternal deaths dropped for Germany, France, Japan, England, and Canada to less than 10 per 100,000 expectant mothers. For the U.S., however, the number rose to a staggering 26.4. There is an exception here, however — and that’s California. This state is considered the best for providing quality care to expectant mothers, as its maternal death rate has dropped in half. Experts see that California is using some of the finest safety measures in the country for women, but other states have yet to adopt their tactics.

Why are more women in danger than ever before?

As Dr. Steven Clark, a childbirth safety expert and professor at Baylor College of Medicine, tells USA Today, many medical professionals are “riding the range doing whatever they’re wanting to do.” And as far as safety practices in hospitals country-wide go, he says, “It’s a failure at all levels, at national organization levels and at the local hospital leadership levels as well.” As far as how women are dying, in many cases, blood loss is the problem — and it’s completely preventable. The publication notes studies show that up to 93% of women who bled to death during childbirth would have lived if only the hospitable staff had realized how much blood was actually lost. Hospitable workers assigned to the pregnant patient should be tracking blood loss by monitoring the weight of bloodied pads — but alas, it seems many nurses and doctors aren’t following simple practices such as these. Preeclampsia, a blood pressure disorder, also causes many deaths during pregnancy — and a hospital association trainer told USA Today that up to 60% of these deaths were preventable, too. Failing to identify the dangerously high blood pressure can lead to the body shutting down, which happens way more often than it should in a developed country like the U.S.

What is being done to prevent future deaths?

Hospitals around the country are understanding the greater need for better maternal health care, so hopefully, the trend can be reversed. There are currently 985 hospitals country-wide enrolled in a program designed to improve childbirth safety. But there have been pushes for safer practices in the past. In 2010, California researchers promoted a “tool kit” designed for safer childbirth. The kits contained “policies, procedures, and checklists that, pursued together, appeared to save mothers’ lives.” The American College of Obstetricians and Gynecologists has also pushed for more recognition and treatment of high blood pressure in pregnant women, as this still stands as a leading cause of death. Federal records show many doctors and nurses haven’t been proactive in treating this preventable but deadly condition in expectant mothers, thus resulting in many deaths.

Are hospitals the safest places to give birth?

For many women, heading to the hospital to give birth is the only place they’ll consider. But given the current statistics, some may start weighing other options. IFLScience reports a British study found women with low-risk pregnancies who chose to have home births had bad outcomes less than 1% of the time — and that was for women who had never given birth before. For women who had given birth previously, home birthing was just as safe as hospitable birthing. Here’s something else to consider: The study found women with low-risk births who went the hospitable route were also between four and eight times more likely to get a C-section. This may be because of how close the emergency room was to them, rather than by their own preference. As for the U.S., there’s a one in three chance that a pregnant woman will undergo a C-section for delivery. And that comes with its own set of potential complications as well. If you’re pregnant, it’s wise to look at all of your birthing options. Ask your doctor plenty of questions, and do your research on the best hospitals near you for expectant mothers. It may literally be life or death.

Can You Get the Flu Shot While Pregnant?