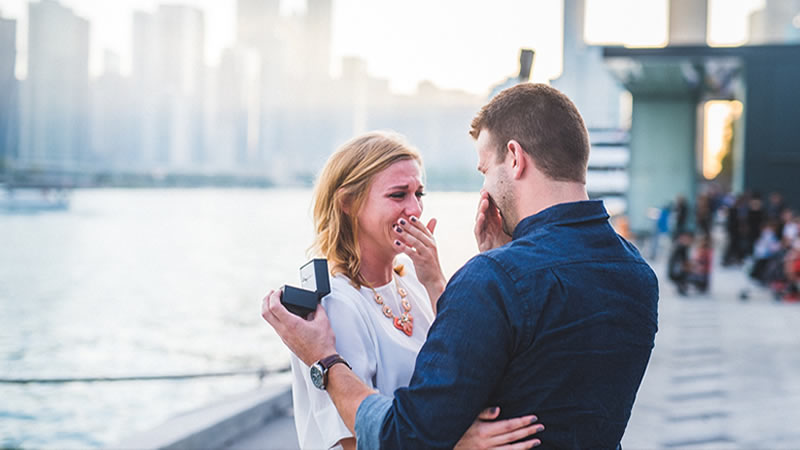 Marriage is finally fashionable again, after forty years of decline- it’s up by 5.3% this year, with a record low in 2009.  It would seem that August is the most popular time to propose, making it the most romantic month to ask those four very special words. The jeweller has found a 30% increase in sales during the month of August as many men are popping the question while on holiday.

There are a staggering 262,240 weddings each year in the UK, which calculates as one every two minutes! While there might be more weddings, churches are in decline as the setting couples are choosing to say their vows. Seven out of ten marriages are now civil ceremonies. With alternative locations, there is a price tag it would seem, with the average wedding now costing £22,000- a surge of £7,000 in a decade.

There are still a big number of first marriages taking place with 67% having never walked down the aisle before, however 15% are remarriages and 19% are marrying someone who has previously been betrothed. The most common time that couples tend to get married is between the ages of 25-29, however some leave it until their mid-thirties before committing to one another- however the elderly are catching up, as their number of weddings has seen a surge with more than a fifth aged between 60-65 exchanging vows.

Unsurprisingly the Lake District is the most popular place to ask the question, closely followed by Bath and Brighton. Stats suggest that being married does help towards happiness- for married couples are happier and have a greater sense of wellbeing than cohabitees and single, divorced or separated people.

The Art of Husband Management

7 Outrageous Outdoor Wedding Blunders and How to Avoid Them

Christian Wedding: how and what of it