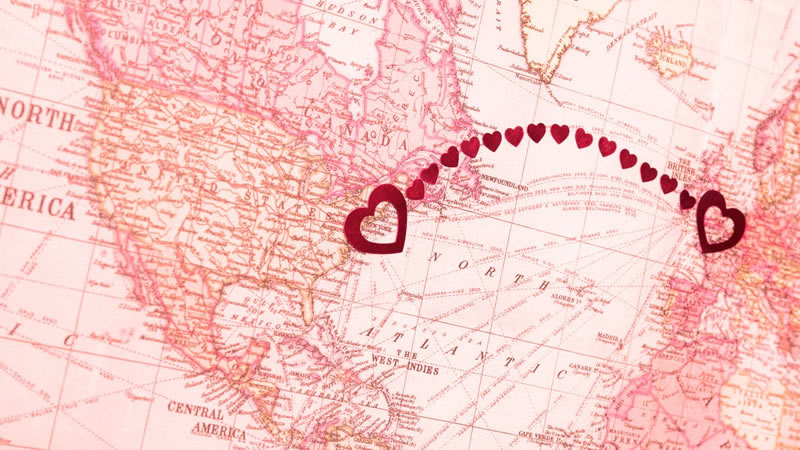 Whether or not you’re one of the 3.5 million married American couples who live apart for reasons other than impending divorce, your relationship can benefit from the wisdom of husbands and wives who don’t share a home. After all, they have to get creative with how they maintain their bond and budget their time. Check out the top 10 tips for a happy marriage from five real long-distance sets of spouses.

Jacey Eckhart from Herndon, VA, says she complained often during the first few months her husband, Brad Skillman, a naval officer, was living about three hours away in Norfolk, VA, while in port. To regain perspective, she listed all the reasons they chose to live separately-their child’s education, her heavy work travel schedule, so her husband could better prepare for his upcoming deployment and more. “Whenever we got tired of living apart, we reread the list and remembered that sometimes adults do hard things because it’s best for the family.” Write out the pros for the difficult choices you and your husband have made, so you have a reminder handy when you need it.

2. Avoid playing the “who has it harder” game.

After writing her husband pages of email, Elizabeth Ann West from Ledyard, CT, felt frustrated when the reply she received was only a few lines long. She was busy with the kids and tending to their home; why couldn’t her spouse put in as much effort as she did, she wondered. In reality, Joshua West, a naval officer traveling the world, simply didn’t have time to craft a longer response while on his submarine. If you’re feeling like your situation is more difficult than your spouse’s or you’re doing more work, take a step back and remember the things your husband does for your relationship, Elizabeth suggests. That way, you ward off resentment.

3. Find the best time to talk-and avoid the worst times.

“My husband and I never had a good phone call between 5 P.M. and 7 P.M.,” Jacey admits. “He’d always get interrupted on the ship then.” The couple realized they talk best in the morning and later at night, so they’d call each other then and stick to short texts at other times. If your spouse tends to be cranky in the morning or you’re too tired to talk after work, focus on yourselves at those times (take a bath; go for a run). You can reconnect when you’re both in the mood.

4. Be spontaneous when showing your love.

Like many spouses who live apart, Elizabeth would write a letter to her husband every morning while he was on duty to show she cared. After about six months, though, the messages lost their sentiment. Similarly, the same overused gestures lose meaning for couples who share a home. So occasionally change up how you say I love you. Try writing something on the steamed-up bathroom mirror during his shower, surprising him with his favorite meal or doing as Elizabeth did-laminating notecards with inspiring quotes on one side and a personal message on the other.

It’s tempting to plan many exciting activities to do as a twosome, especially if your time together is scarce. But Linda Hartley, who lives in Ashford, New South Wales, Australia, and her husband, Stephen Hartley, who works four hours away, make the most of their weekends together by doing very little. Besides attending their children’s sporting events, they just relax! If you cram in over-the-top date nights when life is already chaotic, plan a “boring” day to simply bond with your beau.

6. Don’t hesitate to get outside help when your relationship needs it.

You’re not the first couple to experience problems in your marriage. But if you’re having trouble solving them yourself, look elsewhere. Elizabeth, who grew up in a military family and married into one “knew to reach out to women who had been there, done that with deployments” because it’d be too hard to face living apart without support. Whether you’re dealing with money troubles or infidelity, a marriage therapist can help you through almost any situation-as long as you reach out to one.

The lack of body language and tone makes it hard for the person on the other end of your IMs, emails and texts to really know how you’re feeling. And if a response doesn’t come as fast as you want one, it’s easy to assume your spouse is angry. Melissa Anderson says she and husband Justin Anderson are sure to communicate clearly-and skip making assumptions when they don’t have the full picture. Even if you live together, always tell your husband exactly how you feel-and ask him when you’re not sure what’s going through his mind. And never expect digital communication to fully convey your thoughts.

All the alone time in a commuter marriage creates the perfect opportunity to find a personal pastime. Patricia Guerra’s husband, Humberto Guerra, works in Puerto Rico during the week and goes home to Philadelphia on weekends. “I had to reinvent myself and try things I enjoy doing that Humberto does not,” she says of their time apart. For any married couple, too much time together can be suffocating, and “going out with friends, exercising or volunteering,” says Patricia, will help you avoid depending entirely on your spouse for fulfillment.

9. But beware of taking on too much.

When Elizabeth and Josh started living apart, she wanted to take on as many tasks as possible-less time for her to think about their separation! Unfortunately, this put stress on their relationship. “The last thing we needed were new pressures and expectations,” she says, since long-distance marriages are difficult enough. Even when you’re sharing a home, taking on a plethora of projects moves focus away from the relationship and toward accomplishing those goals. Avoid adding too many duties to your to-do list so you can fully embrace your relationship.

10. Talk about the not-so-serious things in life.

Taxes. Home repairs. Utility bills. These topics are important to discuss, but if it’s all you’re talking about with your husband, lighten up your chats! With limited time to speak with each other, long-distance couples avoid overwhelming each conversation with stressful issues. “Make an effort to talk about subjects outside of the relationship or work, such as a book you’re both reading or a TV series you’re both watching,” Elizabeth recommends. If you limit yourselves to tense topics, you may begin to view talking to your husband as a chore instead of a reward.

Scott Disick Pulls Kourtney Kardashian in for a Passionate Kiss

It’s time to End your Relationship

5 Tips to Help You Find Your Personal Wedding Style

8 Things your Husband Fears about Marriage