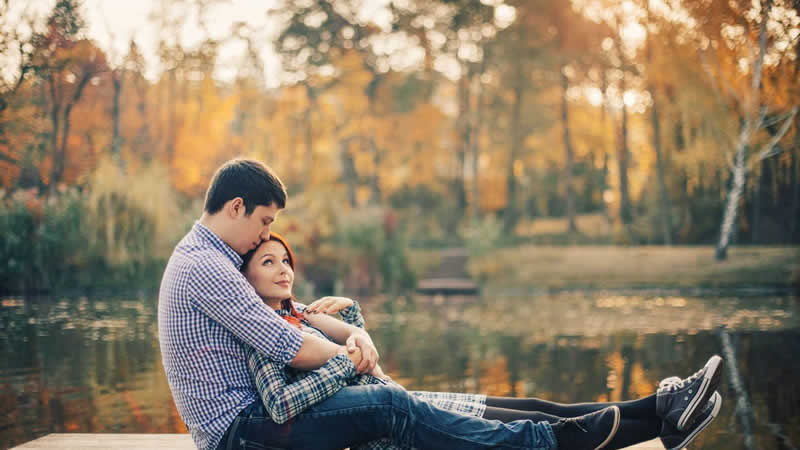 Finding a man who’s willing and ready to settle down and love you FOREVER is no easy task. So when you do find the one, it’s like walking down the street and discovering a hundred dollar bill on the ground — a sweet surprise that you’ll snatch up in an instant. Here are nine signs the guy you’ve got is so helplessly in love, he’ll never fall out of it.

He makes sure you’re happy day in and day out. He listens to your crazy work stories; he rubs your neck when it’s sore; he cooks you dinner on the nights you’re feeling sleepy. Caring for you is one of his top priorities, and he does a damn good job of it.

If he’s texting you every day to see if you’d like to Netflix and chill (I kid, I kid), you mean something to this guy, because, let’s face it — they’re notorious for spontaneous ghosting.

3 He Keeps You in Mind When Making Major Decisions.

He doesn’t take a new job without talking to you first. Or maybe he’s thinking about renting an apartment across the city, but he wants to double check that the commute between your place and his will be OK (or perhaps he wants you to move in with him!). Sizable decisions like this have a bearing on your partnership, and he’s well aware.

4 He Tells You Things He’s Never Told Anyone.

Late at night — which everybody knows is prime time for life’s most meaningful conversations — he tells you things he’s never, ever told anyone . . . not even his best bro. FYI: this is the equivalent of a man forking over his heart.

5 He Doesn’t Mind Talking About the Future.

When you bring up buying a house or getting engaged somewhere down the line, he doesn’t flee for the front door. He doesn’t have to be 100 percent on board with big relationship steps, but he’s totally open to having a real conversation about them.

Naya Rivera: ‘I Lost My Hair and Confidence After Giving Birth’