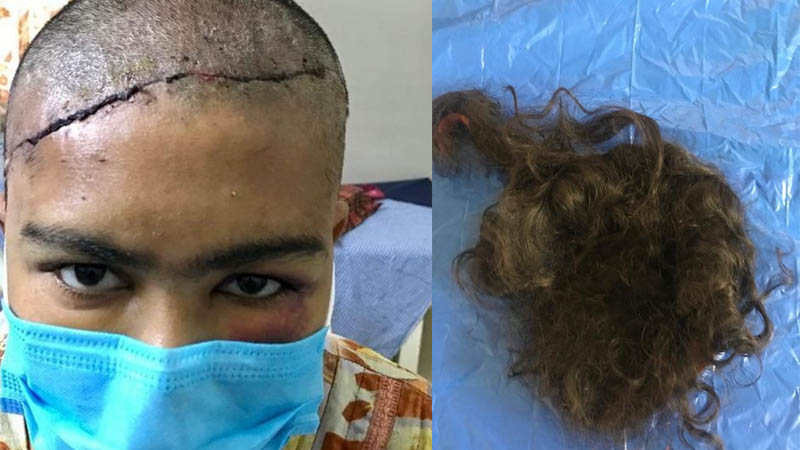 Gruesome pictures show how doctors re-planted a woman’s scalp after it was ripped off by a machine.

Medics sewed her scalp back onto her head after her hair got trapped in an aluminium roof sheet machine.

The successful operation was carried out by Dr S Kumaresan and his team of nine other medics at Abhi S K Hospital, Gobichettipalayam, in Tamil Nadu, India.

Her surgery wounds will take two weeks to heal before Kavitha’s hair will grow back.

Dr Kumaresan said: “We then decided to carry out microvascular plastic surgery [after an examination] on Kavitha to replant the scalp.

“She will get her normal hair growth in a few months.”

It comes after a young girl had her scalp ripped off in a horrific farm accident leaving her screaming in agony in another freak accident in India.

Kushpreet Kaur, aged nine, had her entire scalp and forehead sheared off when her hair got caught in a tractor’s crop spraying mechanism.

The shock incident happened on November 10, 2018, when the young girl was riding on top of her uncle’s tractor in Dharampura village in Punjab.

Her uncle was watering an orange orchard when he discovered his niece covered in blood and missing her scalp.

She was initially rushed to her local hospital but later transferred to the Cosmo Super Speciality Hospital in Bathinda to undergo complex plastic surgery for eight hours to reattach her scalp.

The surgery was performed by Dr Raman Goyal.

He said: “Khushpreet’s complete scalp and the skin of her forehead had peeled off in the accident.

“As soon as she was brought in we decided to conduct micro vascular repair of the scalp and reattach the same.”