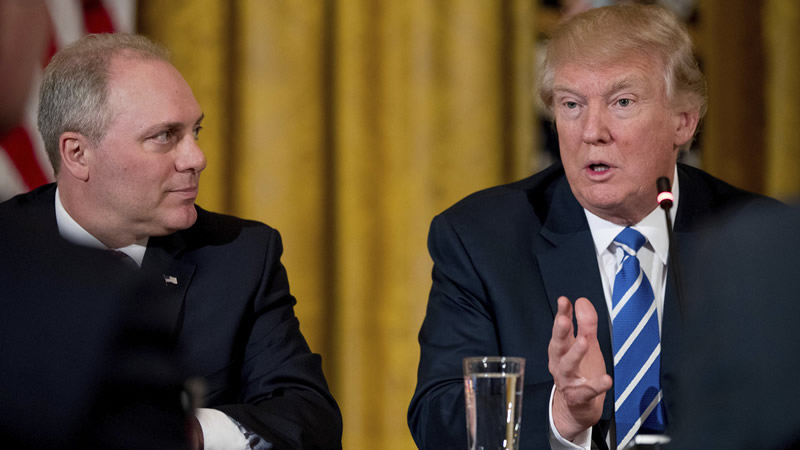 Congressman Steve Scalise of Louisiana, the House minority whip, appeared on ABC’s This Week more than three months after Biden won the electoral college 306-232 and the popular vote by more than 7m ballots and just over a month after the Democrat was sworn into office.

Trump now lives in Florida but he has refused to accept reality and concede, even after having the vast majority of cases mounted to pursue baseless claims of voter fraud laughed and thrown out of court.

He was impeached a second time for inciting the attack on the US Capitol on 6 January, having told supporters to “fight like hell” to overturn the election. Thanks to Republicans in the Senate, he was acquitted.

“Clear this up for me,” ABC host Jonathan Karl said to Scalise on Sunday. “Joe Biden won the election. He is the legitimate president of the United States. The election was not stolen, correct?”

“Look,” Scalise said, “Joe Biden’s the president. There were a few states that did not follow their state laws. That’s really the dispute that you’ve seen continue on.

“And, look, if you’re Joe Biden, you probably want to keep talking about impeachment and anything other than the fact that he’s killed millions of American energy jobs, that … they just signed the Paris [climate] accord. It’s going to kill manufacturing jobs in America.

“But at the end of the day, when you look at where we are in this country, either we’re going to address the problems that happened with the election that … millions of people are still concerned about, the constitution says state legislatures set the rules for elections, that didn’t happen in a few states, and so, going forward – look, Joe Biden’s the president. But does he…”

“But, congressman, I know Joe Biden’s the president. He lives at the White House. I asked you, is he the legitimate president of the United States, and do you concede that this election was not stolen? Very simple question. Please just answer it.”

“Look,” said Scalise, not answering the question. “Once the electors are counted, yes, he’s the legitimate president. But if you’re going to ignore the fact that there were states that did not follow their own … laws, that’s the issue at heart, that millions of people still are not happy with and don’t want to see happen again.

“You know, look … you can rehash the election from 2020 all day long, but there are people concerned about what the next election is going to look like. Are we going to finally get back to the way the rule of law works?”

Scalise’s comment about the rule of law echoed statements from Trump, his supporters and his lawyers, who have insisted he represents the forces of law and order despite having incited an assault on Congress in which a police officer was one of five people killed and scores of others were injured.Donald Trump to address CPAC on future of Republican partyRead more

“I was doing some fundraising throughout a number of parts of Florida,” he said, “ended up at Mar-a-Lago, and the president reached out, and we visited. I hadn’t seen him since he had left the White House. And it was actually good to catch up with him. I noticed he was a lot more relaxed than in his four years in the White House.

“He still cares a lot about this country and the direction of our country. But, you know, it was a conversation more about how he’s doing now and what he’s … planning on doing and how his family is doing.”

In the long term, Trump’s plans may include another run for office – or other ways of keeping congressional Republicans firmly under his thumb. In the short term, the former president will next week address the Conservative Political Action Conference, or CPAC, in Florida.

His subject: the state of the Republican party.