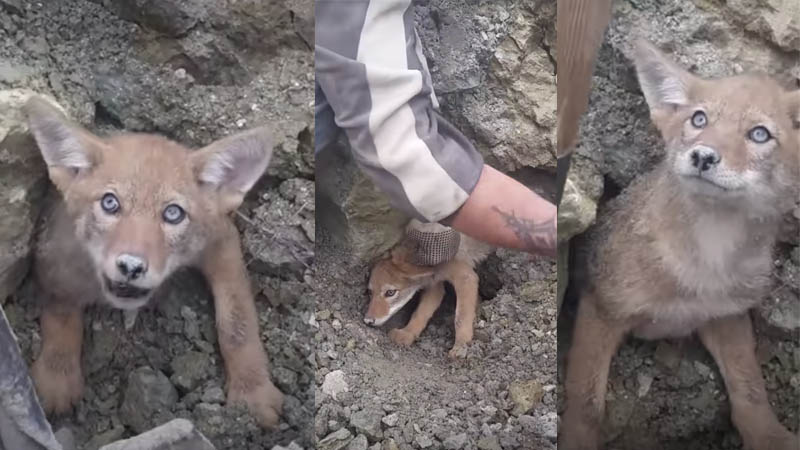 A group of construction workers on a job site heard a strange howling coming from a hillside nearby. When they ran over, they were astounded to see a baby coyote trapped after the den collapsed around him. His family made it out and left him behind out of pure survival. He was all alone and very scared.

Two men grabbed their gloves and a shovel. They were not going to let the pup die there. The baby coyote looked up at them with the most piercing blue eyes they had ever seen. He was desperate to be freed but this wouldn’t be a simple task.

The coyote’s body was completely submerged. As one man tried to dig him out as much as he could, the baby coyote let out the cutest little cry. He was overwhelmed and had no clue if he’d make it out alive. But even as one man continued to dig, the coyote’s hips were packed in tight.

They had to come up with another plan. Being that this is a wild animal, a rescue like this is risky. He could bite them but the men still wouldn’t give up. As one man filmed the rescue, the other put the shovel down and used his hands to clear the dirt from around the coyote’s waist.

After enough dirt was moved aside, the man was able to pull him out by the nape of his neck. The coyote was so relieved. But they didn’t want to let him go just yet. They had to be sure he wasn’t injured. If he couldn’t run on his own back to his family, the men had every intention of bringing him to a vet clinic.

But as the man let the coyote go, they could see that he was indeed okay. In fact, the other man even says, “I think he was better off than he was before.” And then the baby coyote took off towards his family. He was happily reunited with his mom less than a mile away.

While we never suggest doing this yourself, we are so grateful for these two caring and brave men. If you see an animal like this in distress, please call your local authorities. You have to see the rescue for yourself! And how cute the baby coyote is! Scroll on down and check it out.