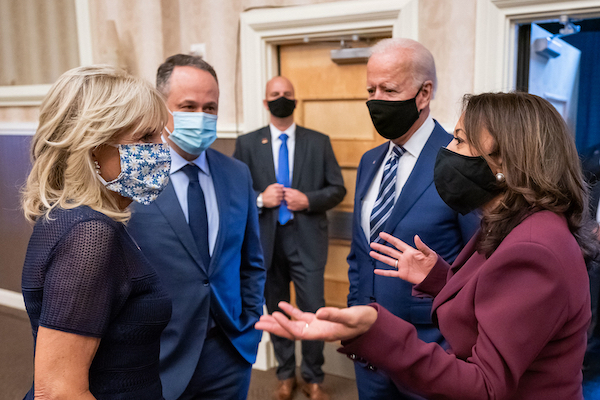 Kamala Harris continues to prove that she is one of the most cringeworthy politicians in American history. On Tuesday morning, Harris and her husband Doug Emhoff kissed each other while wearing masks at Andrews Air Force Base in Maryland.

WATCH the barf in your mouth moment below:

“Harris and Raimondo are set to participate in a roundtable discussion with the owners of women-led small businesses to talk about the impacts of the pandemic,” The Providence Journal reported. “Harris is expected to talk about the value of high-speed internet, a piece of President Joe Biden’s infrastructure package he has tasked the vice president with leading. Harris will be joined by Gov. Dan McKee, Sens. Jack Reed and Sheldon Whitehouse; and Reps. Jim Langevin and Davis Cicilline at various stops on her Providence travels.”

The border crisis continues to get worse and the Biden administration doesn’t seem to care about all the lives they are ruining.

Daniel Horowitz with The Blaze explains just how bad things at the border have become:

Every month, a mass of illegal aliens, including some of the world’s most dangerous criminals, are pouring over our border in numbers large enough to fill up major cities. Our border is less secure and our country is less sovereign than most third-world countries. Yet you’d never know about it because the media has chosen not to cover it.

Last week, President Joe Biden said in an interview with NBC that “we’ve now gotten control” of the border. The media has certainly taken his cue with its blackout of any news at the border. But the reality is that the weekly and monthly apprehensions are still higher than at any point in recent history, and there is a concern that the number of criminals getting away from Border Patrol is increasing every week.

According to preliminary numbers obtained by TheBlaze, Customs and Border Protection apprehended 177,431 illegal aliens at the southern border during April, topping the roughly 172K apprehensions during March. That is higher than at any point since March 2006. Broken down by individual week, the numbers for the last week in April were over 44,400, which is higher than almost any week and slightly higher than the preceding three weeks. So, the numbers haven’t even peaked yet from record levels, much less dropped to controllable levels.