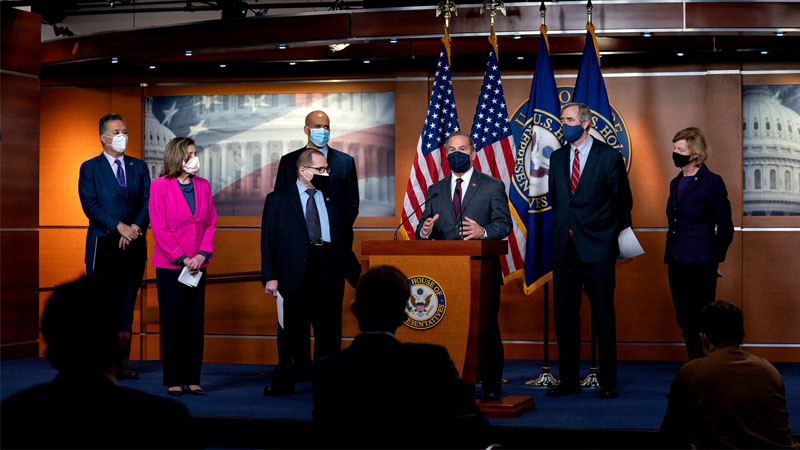 A divided House on Thursday narrowly passed a sprawling bill that would extend civil rights protections to prohibit discrimination on the basis of sexual orientation or gender identity, but the measure faced an uphill battle to enactment, with Republicans almost uniformly opposed.

The legislation, passed 224-206, almost entirely along party lines, stands little chance of drawing enough Republican support in the Senate to advance, at least in its current form. It was the second time the Democratic-led House had passed the measure, known as the Equality Act, which seeks to amend the Civil Rights Act of 1964 to add explicit bans on discrimination against lesbian, gay, bisexual and transgender people in both public and private spaces.

“In most states, LGBTQ people can be discriminated against because of who they are, or who they love,” said Rep. David Cicilline, an openly gay Democrat from Rhode Island and the lead sponsor. “It is past time for that to change.”

In a landmark decision in June, the Supreme Court ruled that the 1964 civil rights law protects gay and transgender people from workplace discrimination, and that the language of the law, which prohibits discrimination on the basis of sex, also applies to discrimination based on sexual orientation and gender identity. The Equality Act builds on that ruling, and would expand the scope of civil rights protections beyond workers to consumers at businesses including restaurants, taxi services, gas stations and shelters.

It would also water down the Religious Freedom Restoration Act, the 1993 law at the heart of the Hobby Lobby Supreme Court case that set a high bar for governments to enact laws that “substantially burden” an individual’s freedom to exercise religious beliefs. Those protections have been cited by, for example, bakers or photographers who object to serving same-sex weddings.

The House first passed the legislation in 2019, but the Republican-controlled Senate at the time refused to take it up. Upon taking office, President Joe Biden encouraged the Democratic-controlled Congress to “swiftly pass” the bill, calling it a “critical step toward ensuring that America lives up to our foundational values of equality.”

But 10 Republicans would need to join Democrats to reach the 60-vote threshold needed to pass legislation under normal Senate procedures, a level of support its proponents are unlikely to muster, unless substantial changes are made.

Sen. Susan Collins of Maine, the only Republican in that chamber to co-sponsor the legislation during the last Congress, told The Washington Blade that she would not do so again, citing the lack of certain revisions she had requested. Sen. Mitt Romney, R-Utah, has indicated he would not support the legislation, saying it lacked “strong religious liberty protections.”

In the House, consideration of the measure devolved into bitter acrimony after Rep. Marjorie Taylor Greene, the first-term Republican from Georgia who is known for spreading false and bigoted conspiracy theories and has a history of online trolling, attacked the daughter of Rep. Marie Newman, D-Ill.

In emotional remarks in support of the Equality Act on Thursday, Newman said she was fighting to advance the legislation to ensure that people like her daughter, who is transgender, would no longer face discrimination. Greene responded on Twitter, calling Newman’s daughter “your biological son” and saying that she did not “belong in my daughters’ bathrooms, locker rooms, and sports teams.”

The ugly attack on a fellow lawmaker’s child came after Newman posted video of herself putting up a transgender pride flag outside her office on Capitol Hill so Greene, her office neighbor, would have to “look at it every time she opens her door.” In response, Greene put up a poster of her own in the hallway outside that bore the phrase: “There are TWO genders: MALE & FEMALE.”

Greene may have been the most vocal in her opposition to the legislation, but it drew fierce criticism from nearly all House Republicans, many of whom argued that the protections were overly expansive and infringed on religious freedom.

“This is a government using its power to tell us to bow down to the will of a cultural elite in this town who want to tell us what we’re supposed to believe,” said Rep. Chip Roy, R-Texas. “We’re not going to do that.”

Others claimed that the legislation could imperil women’s rights, an argument long used by conservatives to oppose transgender rights legislation despite the fact that the bill contains protections explicitly to prevent discrimination against women.

Before the vote, Rep. Jim Jordan, R-Ohio, approvingly shared on Twitter a Wall Street Journal op-ed that asserted that the measure would “threaten the existence of women’s prisons, public-school girls’ locker rooms, and women’s and girls’ sports teams.”

“One of the many reasons to oppose this bill,” Jordan wrote.

The legislation has won the support of several civil rights groups as well as high-profile leaders in the business community, including Coca-Cola, IBM, Microsoft and the U.S. Chamber of Commerce.

Girl, 14, ‘stabbed sister with cerebral palsy to death’ while their parents slept