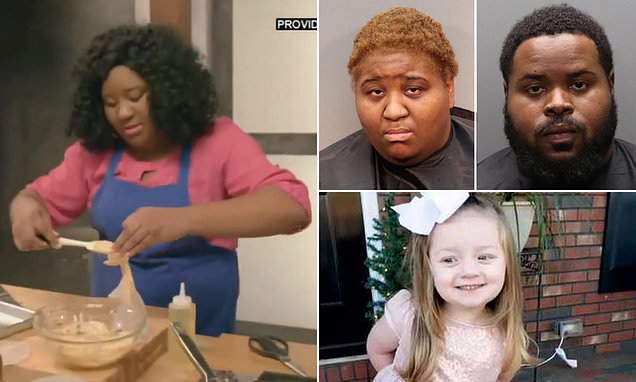 The Food Network has been forced to cancel an entire season of a cooking show after the winner was charged with the murder of a child.

Season 20 of Worst Cooks in America has been scrapped amid reports the contestant and her husband are accused of battering their adopted three-year-old daughter to death.

Ariel Robinson, 29, appeared on the show, however it is no longer available to watch on Hulu, Discovery+, YouTube, or the Food Network website.

The show’s season was initially aired over the summer last year, after being filmed in February 2020 before it was taken off.

However, the latest 21st season premiered earlier this month and remains online, available to stream along with previous seasons.

Ariel and her husband Jerry Robinson were arrested two weeks ago in South Carolina following the death of toddler Victoria ‘Tori’ Smith.

Last year, Ariel spoke to Greenville News and said she had adopted three kids, including Victoria.

She told WYFF4 : “‘I just know that the Lord had his hands on me and he had a purpose for me to go on there.

Speaking about her appearance on the show, she said: “He knew we were going through this adoption, we really could use the money and he just let everything work out for our good.”

She added she wanted to use her winnings to take her large family to a waterpark resort or a beach.

The couple were arrested after officers with the Simpsonville Police Department and the South Carolina Law Enforcement Division arrived at their home after reports of an unresponsive child.

According to police the Robinsons “did commit child abuse by inflicting a series of blunt force injuries, which resulted in the death of the victim.”

If found guilty, the duo could face 20 years to life in prison.

They are currently being held at the Greenville County Detention Centre without bond.

What Does a Talent Booking Agency Do?

Brave girl, 8, battling ‘long Covid’ is too ill for school 10 months on