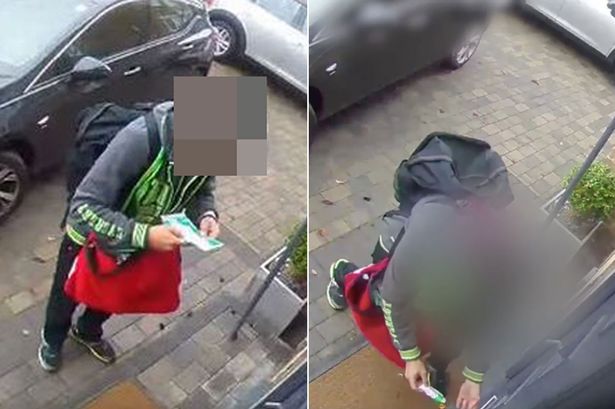 A delivery man was allegedly caught spitting into a charity collection bag before posting it through a couple’s door in sickening CCTV footage.

The clip, captured at a house in Kirk Ella, Hull, on Tuesday appears to show the elderly man spitting onto the envelope of the charity bag, before folding it in half and posting it through the letterbox.

The man, who wears a mask around his neck, was delivering the collection bags for Tree of Hope children’s charity, and is employed by the charity’s distributor, SOS Clothes Ltd.

The couple agreed for Hull Live to share their video, above, to warn others to be aware before picking up anything posted through their door.

“It’s awful,” said the homeowner, who did not wish to be named, reports Hull Live.

“I’m just making people aware. We were shocked mainly and just concerned as we have elderly people living down the street who are shielding.

“I can zoom in and the noise is telling.”

The couple chanced upon seeing the footage from their Arlo Pro camera which is positioned above their front door after they checked their alerts on their phone last night.

The 30-year-old said he hoped this incident would not put people off using charity bags.

He added: “I don’t want to come across that I am saying he is spitting, just as a disclaimer, as he very well could just be blowing on it but that is still not good in this current climate.

“I don’t want it to stop people using charity bags, but just want to make sure they are safe to use and wont cause any harm.

The homeowner has reported the incident to both Humberside Police and the Tree of Hope charity. Police have told him they are investigating.

The charity has already sent a message back to the homeowner apologising and confirming it would investigate alongside distributor SOS Clothes Ltd.

The video has today been posted on Facebook to warn others and has already and received hundreds of comments from outraged viewers.

One said: “Wow well this needs sorting that is vile.”

Another said: “He needs locking up.”

One comment said: “Omg this is absolutely disgusting and disgraceful and needs reporting. Disgusting human being.”

Gill Gibb, Chief Executive Officer at Tree of Hope said: “When we received this complaint this morning we immediately passed it onto our distributor at SOS Clothes Ltd to investigate as we do with all issues which we take extremely seriously.

“We train all our collectors to adhere to all Fundraising Regulator guidelines and Sam will contact you with the results of the investigation and what he intends to do.

“Tree of Hope apologises for any distress caused and can confirm that Sam is in contact with the complainant directly and that he will keep us abreast of developments.”

Ouch: If You Thought CNN Was Collapsing, Wait Until You See What’s Happened to Hollywood