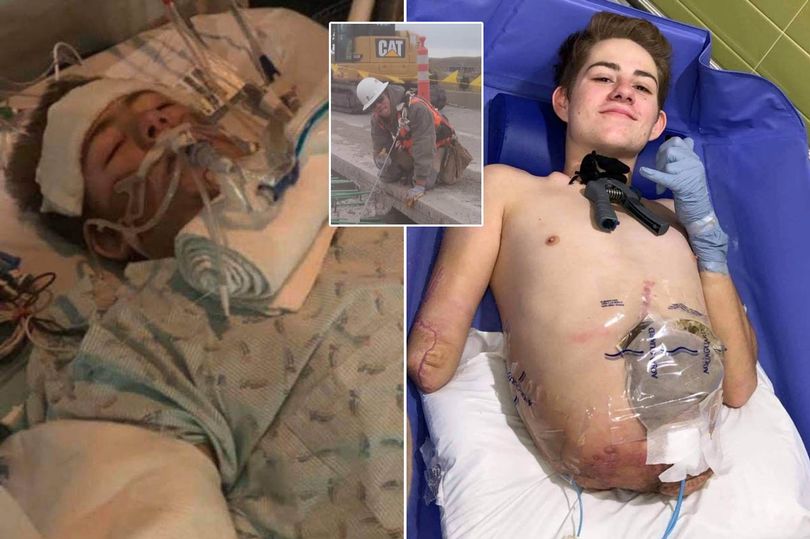 A teenager was left with no lower body after he plummeted 50ft in a horrific forklift accident.

Loren Schauers, 19, from Great Falls in Montana, the US, got trapped underneath the four-ton vehicle after coming off a bridge in September 2019.

Cars had started illegally passing him through traffic lights, narrowing the single lane.

Loren, who was working at a construction project on the bridge, got too close to the edge and the ground crumbled beneath him.

He said: ”The seatbelt ended up wrapping around my leg as I jumped out so I actually swung out instead and broke one of my ribs off the floorboard of the forklift.

“I tried staying on top of the forklift as much as I could as it rolled and then I was thrown from the forklift at the end of the hill once it finally landed.

“I was conscious the whole time. My eyes were wide open and I saw the forklift come down and land on my hips and my right forearm.

“I remember looking to my right with the forklift on top of my body and there was big old piece of muscle from my arm just lying on the ground next to me. It had just blown apart instantly from the impact.”

The young labourer made the brave decision to let medics perform hemicorperectomy surgery – where everything below his waist was amputated – to save his life.

Doctors told his devastated girlfriend Sabia Reiche, now 21, he wouldn’t survive, and she said goodbye to him six times – fearing he wouldn’t live another day.

But miraculously, he pulled through.

The pair had only been together for 18 months when the accident happened but said the turmoil brought them closer together, and they got engaged this year.

Describing the operation, Loren said: “They thought my lower extremities were still salvageable.

“The doctors tied off my main veins down below and took scans of my body to see what state it was in there and they realised my pelvis had completely crumbled.

“I was transferred to Seattle, Washington, by mercy flight where they first performed a surgery leaving my right hip, genitalia, and left thigh.

“Once they had also seen the state of my pelvis, that’s where it was then deemed that I’d need a hemicorporectomy surgery.

“They then tried saving my sperm with my consent but it turned out to not be viable.”

One month after his accident, Loren was transferred to a hospital back in Montana so family could visit – as doctors still believed he would die.

But his health started to improve at an incredible speed.

He has taught himself how to put on his “bucket” prosthetic and get into his wheelchair without any help.

Currently unemployed, Loren got compensation but would like to be an influencer on Twitch – a video live streaming service.

If you want to support Loren and Sabia on their journey, you can follow him on his Twitch account at @iAceNation.

Health Pointers for the Fitness Women

Female teacher accused of ‘s*x with pupil, 14, after begging for explicit pics’