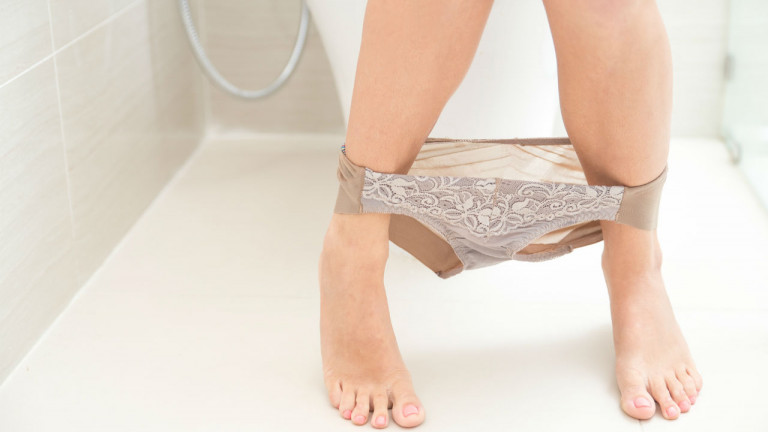 As if bleeding for three to seven days a month isn’t enough, sometimes your vagina will bleed when you’re not on your period. When this happens, the bleeding is usually light, and it’s called spotting.
“There are a number of reasons someone might be spotting before their period or between their periods (intermenstrual spotting),” explains Jennifer Linhorst, MD, an OB/GYN practicing in Denver. “Some of these reasons are not concerning, but can certainly be annoying to women. However, it is important to rule out pathologic causes before settling in on a benign diagnosis.”

Spotting is any light vaginal bleeding that happens when you’re not on your period — and by light, we mean a few drops. You might see a little bit of blood on your underwear or on the toilet paper when you wipe after peeing, but it won’t be enough blood that you’ll need a pad or tampon.
Related Stories

If You Recently Had Your First Period And You’re Spotting…

If you started your period in the past year or two, you might have something called an “immature HPO axis.” HPO axis stands for hypothalamic-pituitary-ovarian axis — meaning how the hypothalamus (a part of your brain), the pituitary gland, and the ovaries work together to control your menstrual cycle. Basically, what this means is that as your body gets used to having a period, your period might change from month to month — you might go without a period for a month or a few months, your period might last two days one month and seven the next, and you might see spotting in between periods.

“During the first one to two years after menarche (the start of periods), young women may not ovulate every month,” Dr. Linhorst explains. “This might be characterized by a couple months of no period, followed by spotting or even heavier flow. It could also just be a normal variant. Not all women will start right off with regular or heavy flow during their monthly period, and the spotting may just be the uterine lining getting ready to shed.”
Spotting is very common in young people, Dr. Linhorst adds. “I see abnormal bleeding across the age spectrum, but age definitely determines what might be at the top of my list,” she explains. “In a young woman who has recently started having periods and who is not sexually active, an immature HPO axis may be at the top of my list, but taking a thorough history is important to help determine what investigations may be necessary.”

Is It Normal To Spot While On Birth Control?

If I’m Spotting Before My Period, Could I Have An Infection Or STD?

Some vaginal infections can lead to spotting. These include sexually transmitted infections such as gonorrhea, chlamydia, trichomoniasis, as well as infections that aren’t sexually transmitted, such as yeast infections or bacterial vaginosis. “These can be diagnosed with cervical and vaginal swabs and then treated accordingly,” Dr. Linhorst explains. “I strongly recommend STD testing to women who present with new onset spotting.”

Spotting is common during the first trimester of pregnancy — according to the American Pregnancy Association, about 20% of women see spotting during their first 12 weeks of pregnancy. If spotting happens very early in your pregnancy, it could be implantation bleeding, which happens when the fertilized egg attaches to the uterine lining.
Spotting during pregnancy could also indicate a cervical polyp. “Polyps are small outgrowths of tissue (think about a larger skin tag) and can bleed easily,” Dr. Linhorst explains. While cervical polyps are a common cause of spotting during pregnancy because of increased estrogen in your body, they can also appear outside of pregnancy, as can uterine polyps. “In young women, these are usually benign growths; in older women, they can sometimes be a site for abnormal cells,” Dr. Linhorst says.

Does Spotting Mean You Have A Cervical Ectropion?

Although “cervical ectropion” might sound scary, it’s a benign (meaning not harmful) condition “where the cervical canal everts and is exposed into the vaginal canal,” Dr. Linhorst says. That just means that some of the soft cells from inside the cervix appear outside the neck of the cervix — it’s often caused by hormonal changes, such as birth control or pregnancy.

Does Spotting Mean There’s Something Stuck In Your Vagina?

Any foreign object left in the vagina — such as a forgotten tampon, or a condom that slipped off — can also lead to spotting. This will usually be accompanied by other symptoms, such as an abnormal odor or discharge. “I have seen my fair share of forgotten tampons in women who present with abnormal bleeding,” Dr. Linhorst says.

Spotting is one symptom of cervical cancer — but if you’ve been getting pap smears regularly and you’re not seeing any other symptoms, that’s probably not be the case. “Guidelines have changed and a pap smear is not recommended every year (though an annual exam is), but I always check when someone last had their pap smear,” Dr. Linhorst says. “In women who are up to date with this, cervical cancer is an unlikely reason for abnormal bleeding.”

If you’ve gone through menopause — meaning you’ve gone at least a full year without having a period — “any kind of bleeding should be investigated,” Dr. Linhorst says. “The most likely reason is due to a thin, delicate uterine lining (in women who still have a uterus), but that can also be a sign of uterine cancer.”

When Should I See A Doctor About Spotting?

Although spotting is common, there are cases in which you should see an ob/gyn. “If it is a new symptom and persists, that would be a good time,” Dr. Linhorst says. “And if there are other symptoms associated with the spotting (foul odor, irritation, abnormal discharge), I would certainly recommend being seen.”

FDA alert: this high blood pressure medication may be life-threatening

The Four life-changing Fitness Tips for those Crossing their 50s