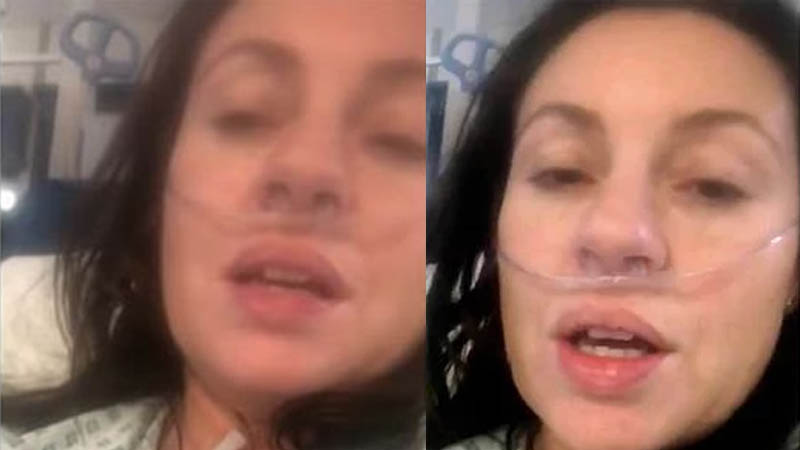 The beautician hit the headlines last year when she filmed herself in intensive care. Millions of people watched the clip after one of her friends transferred it from a private WhatsApp group to public social media.

But the film, meant as a private warning about the virus to workmates, ended up triggering 12 months of unpleasant remarks.

Tara said: “The majority of the messages I received were beautiful. So I was shocked when I started receiving messages via Facebook messenger that were negative and nasty. I was like, ‘What the hell is all this about?’

“One of the comments was ‘you fame-hungry bitch’ or something like that. Well, I’m not actually, I’m quite happy living my life, going to Aldi on Monday, getting the food shopping. I’d hate to be famous.”

The vicious remarks she suffered from about a dozen people lays bare how even those who have suffered the terror of Covid are fair game to online abusers.

Tara, who lives with her husband Richard, 35, and daughters, in Ruislip, Middlesex, was among the first wave of Covid patients.

Being a young fitness fanatic, the sight of her speaking through an oxygen mask in intensive care at Hillingdon Hospital last March shocked the nation.

She said in the clip: “If anyone is thinking of taking any chances, just take a look at me. I can’t breathe without this. They’ve had to sew that into my artery. I’ve got a cannula, another cannula and a catheter.”

After leaving hospital, she added: “It’s like having glass in your lungs – every breath is a battle.”

Toxic messages from as far away as the Philippines questioned whether she had the virus and the authenticity of the video.

She said: “People were having arguments on Twitter saying it’s fake. I was getting messages from people telling me to prove it.”

The “bitch” message continued: “Phony. Using cover to get your name out their [sic] sad cow. U were on a ****ing bit of oxygen, you weren’t even intubated…that’s intensive care.”

Another said “you should be ashamed of yourself” and another “we’re on to you.”

Much of the abuse centred on Tara working as an actor in her teens and early 20s when she had small parts in TV shows including BBC children’s drama Grange Hill.

Last autumn – out of the blue – she was asked by Channel 4 to take part in its reality show The Bridge.

One tormentor put together a 20-minute montage of all Tara’s past work, entitled: “Is she an actress hired by Facebook?”

It said one role as an alcoholic involved “faking symptoms” and claimed there was a similarity with her coronavirus video.

Tara said: “It was a showreel of things I did when I was 19 or 20. They had found this stuff and they’d done a montage of it.

“I was blown away because some of the stuff I haven’t seen or not seen it for years. I just thought how did they get this stuff?”

She added: “I laughed it off. I am thick-skinned and people who I don’t know making comments doesn’t bother me.

“But there is a serious side to it because they are Covid-deniers.

“If I saw this, and I was a person who questions whether Covid is real, then I’d say it isn’t.”

Tara wants greater regulation of social media to stop the trolls, saying: “What action can you take when it’s social media? It’s almost like it’s a law unto itself.”

She did challenge the trolls and some of them accepted they were in the wrong. “I said, ‘Please let me tell you that I did have Covid.

“But I did also used to do acting when I was younger. They are two totally unrelated facts.”

This salad may be life-threatening to you, don’t eat it, throw it out

Facial masks are unmasking another problem (and you should know this)