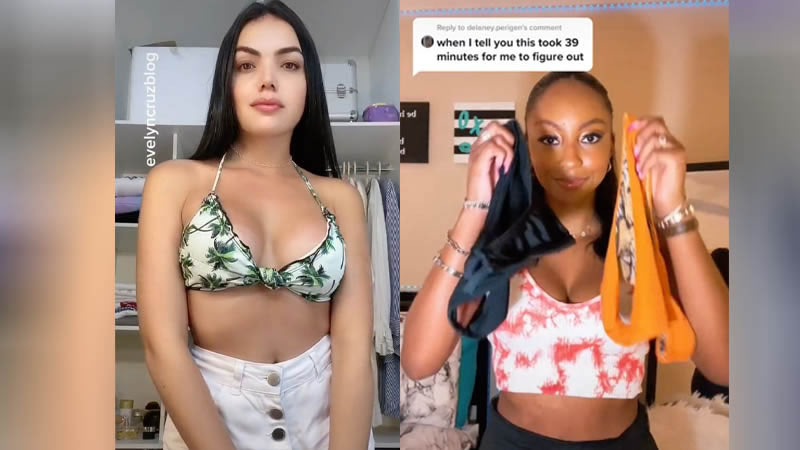 A new viral trend has seen women turning their bikini bottoms into tops.

Rather than spending money on a new set of swimwear for the short-lived summer time, fashion influencers decided to get creative.

They ditched their bikini bras and wore their bottoms as tops instead.

The trick seems to work on different swimwear styles – whether it’s bottoms that tie at the side or traditional brief-cuts.

Evelyn Cruz shared a quick tutorial on TikTok to show viewers how to make a halter-neck triangle bikini top using a tie-side bottom.

First she ties a knot in the middle of the fabric where the gusset sits, then she brings a strap from each side and makes a loop to create a neckline.

Placing it over her neck, the influencer stretches bikini fabric across to cover her chest so that it forms a triangular shape.

Then finally, she secures it by bring the remaining straps at the back and tying a bow.

In a video seen more than 99,000 times, she picks up the black bikini bottom and turns it 90 degrees before putting one arm through the crotch openings.

Then she put her another arm and head through the waist opening.

Adjusting it to cover her curves, Jordyn repeats the same with an orange snake-print bikini bottom on the other side.

Viewers got their hands on to try the hack and some called it a “brilliant, genius idea”.

One said: “I love this! This is amazing!”

Another wrote: “I just did it and it was perfect, what a brilliant trick!”

But some with a bigger bust might be struggling, with a viewer saying: “Nope, too tight and my boobs are screaming.”

The best Bra to Avoid that Back-fat Bulge