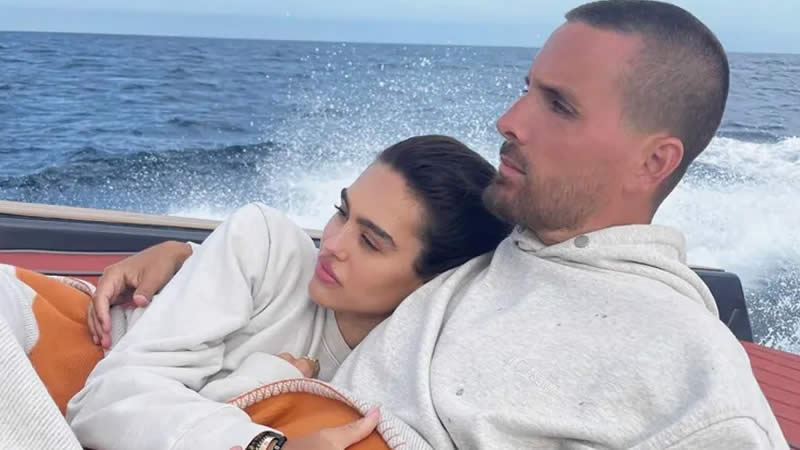 Reality TV star Scott Disick recently went out to sea to enjoy some time off with his girlfriend Amelia Hamlin and his kids. This weekend, the 38-year-old Keeping Up With the Kardashians star took to Instagram and shared photos from a yacht trip with his 20-year-old girlfriend and his daughter Penelope Disick, 9. In one of the pictures Scott posted, he and Amelia could be seen wearing matching grey sweatshirts while covered in a wool Hermès blanket. “Hermès only to swim,” Scott wrote. Amelia commented on his post with a series of a red heart and fire emojis.

She also shared the photo on her Instagram Stories with the caption, “I love you!”

Scott also posted a few pictures with his daughter Penelope, one showed a snapshot of himself kissing Penelope on the head as they both snuggled under the blanket. Scott later shared a pic of his daughter smiling and standing by a railing with a friend.

If you didn’t know, Amelia and Scott began dating late last year. Lately, the duo has been seen spending time often with Penelope as well as, with his and his ex Kourtney Kardashian’s other kids, Mason Disick, 11, and Reign Disick, 6. Amelia and Penelope have seemingly grown closer over the months and the model even calls her by the nickname “Peesh.” Earlier this month, Amelia commented on Scott’s birthday tribute to his daughter, writing, “Happy birthday to the best facialist in town,” adding some heart emojis.

“Amelia has been able to spend more time with the kids recently and is embracing it. She’s learning a lot,” a source close to the couple told E! News in early July. “It’s definitely a whole new world for her, but she loves being around them and is grateful she gets to have this experience. She thinks they are amazing and is really good with them. Her and Scott love planning fun activities with them.”

5 Tips on How to Make Your Boyfriend Want You

Sam Riley Comfortable with On the Road Nudity