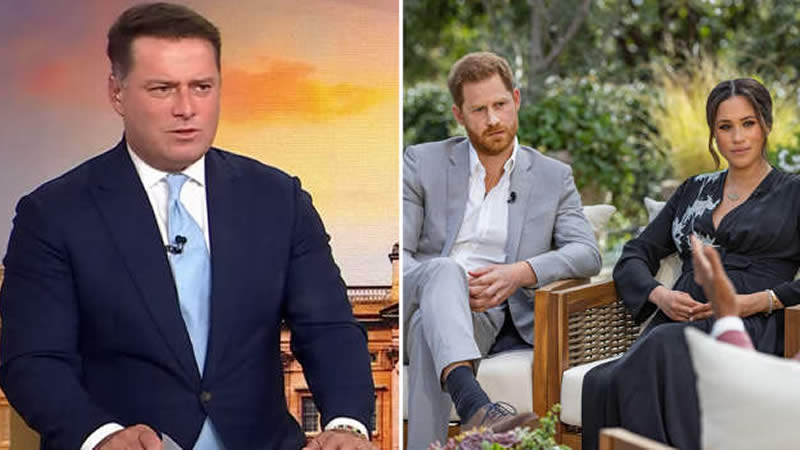 Despite having moved to California to lead a life of privacy, Prince Harry has never been more in the spotlight. Just yesterday the Duke appeared on an American podcast to speak about mental health issues, his childhood and more.

And while Sussex fans have praised Harry for his candidness, others have slammed the royal for the interview, including Today host Karl Stefanovic.

In the interview, the royal spoke about that scrutiny that came with life in the palace, comparing the experience to the movie The Truman Show.

While Ally was sympathetic to the Duke’s plight, Karl took issue with the rogue royal.

“It’s a great thing that he got away from all that prying press.” Karl sarcastically drawled to his co-host, who retorted that Karl should surely take Harry’s discussion of mental health seriously.

Karl, however, doubled down.

“It’s just ridiculous how he keeps whining about his childhood,” the exasperated presenter declared. “He grew up in privilege in a palace.”

And this isn’t the first time the Today host has taken issue with Prince Harry.

Earlier this month, the 46-year-old had quite the bemused reaction to a revelation about the Duke’s relationship with his wife Meghan Markle.

After it was announced that Meghan was releasing a children’s book called The Bench, which the Duchess explained stemmed from a poem she penned to her husband on Father’s Day, Karl couldn’t hide his derision.

“They actually write poetry together!” Karl laughed in disbelief.

Even Ally couldn’t hide her cynicism with regards to the book. Reading the prompter as she announced the news to viewers, she said “Meghan Markle is joining the ranks of Roald Dahl and J.K. Rowling…”, at this point she ad-libbed, “oh, a stretch”, before continuing to read from the autocue, “by writing her first children’s book”.

While Meghan and Harry continue to do the media rounds, word around the palace is that Prince William and Kate Middleton are gearing up to do their own tell-all.

According to royal insiders, the Cambridges are lining up a host of multi-media projects that will see them branch into the world of podcasts and other forms of broadcasting.

Besides giving them the opportunity to highlight their favourite charities and discuss matters that are important to them, the couple are also very keen to clarify their position on longstanding personal topics – including their well publicised feud with Harry and Meghan.

“This will be phased in slowly and they’re not talking about a tell-all per se, but over time you can expect them to discuss matters pertaining to their private lives via these platforms which they can control themselves,” revealed an insider.

Pamela Anderson: ‘Julian Assange and I Have a Special Relationship’