Jennifer Lawrence took to Facebook to say goodbye to David Letterman in her own funny way. The 24-year-old actress posted a photo of herself with a sign that reads, “Don’t do this! No one is sick of you it’s all in your head.”

The Oscar-winning actress posted a photo to Facebook that implored Letterman to stick around for a little while longer. “No one is sick of you it’s all in your head.” Jimmy Kimmel, who purposely has a repeat episode of Jimmy Kimmel Live airing opposite Letterman’s final Late Show, choked up last night while paying tribute to his fellow funnyman—and you can almost feel the lumps in the throats coming from the other celebs who don’t quite agree with Dave’s decision to pack it in. PHOTOS: All the stars at the Late Show With David Letterman finale.

Patton Oswalt, as he is wont to do, wrote a lot on Facebook about Letterman, talking about how he discovered the then- Late Night host in college and it basically changed his life. “So thanks, Dave. I only got to meet you once, when we shook hands after my first and only stand-up set on your show (that’s a pic of my setlist, written in my hotel room that afternoon of the taping). You were friendly but distant, but I could tell you wanted me to do well. One comedian to another,” Oswalt recalled. 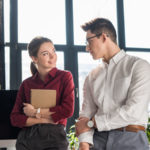 Romance In The Workplace: The Good, The Bad And The Ugly

Debra Messing to Be Honoured at GLAAD Media Awards

Zelda Williams Shares an Emotional Note Ahead of the Anniversary of Robin...

No any image found. Please check it again or try with another instagram account.
@2018 - PenNews. All Right Reserved. Designed and Developed by PenciDesign
FacebookTwitterInstagramPinterest