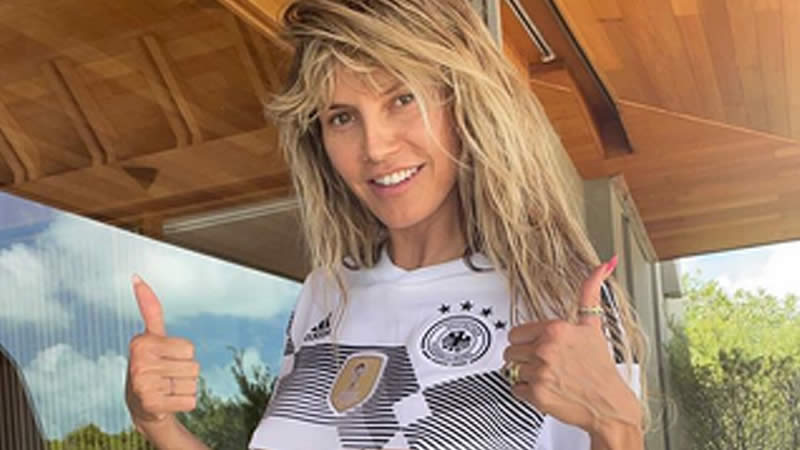 Mom-friendly swimwear means something different for a former supermodel than it does to the rest of us. Mom of four Heidi Klum showed us just how different in a series of sexy bikini pics on Instagram, all shots taken by her manly rock star husband of two years, Tom Kaulitz. With a gorgeous tropical backdrop, no less. (As Liz Lemon would say, “Can I go to there?” And maybe also, “Can I be the Heidi?”)

During Klum and Tom Kaulitz’s beachfront getaway, the Tokio Hotel guitarist captured his wife standing in front of the glass doors leading to the outside oasis in a barely-there string bikini bottom. As you swipe from picture one to two and three, you see a full-body shot of Klum from behind and then zoom in as she turns her face to the camera. Not only is she topless, but she’s also rocking a gold belly chain and a to-die-for pastel rainbow manicure.

It’s not completely clear whether or not the America’s Got Talent judge was wearing a matching bikini top in the first two pics, but by the final one, Klum tossed her hair to the side to reveal her totally topless appearance as she seductively looked over her shoulder at Kaulitz.

The star opted for a simple Instagram caption to accompany the sexy photographs. “📷 @tomkaulitz 🥰, ” Klum wrote, crediting her beau.

Not surprisingly, Kaulitz seems to be loving taking sexy shots of his wife on their vacation. Klum has since posted another topless photo of herself kneeling in the sand, whipping her hair up, in a very Sports Illustrated Swimsuit Edition-type of pose. As the sun sets in the background, the supermodel works it for the camera, er, her husband in a series of seductive poses.

Klum had previously shared a photo of the newlywed couple in bed together, with a glasses-wearing Klum working on her laptop in a patterned bikini as Kaulitz lounged by her side.

Klum told PEOPLE in January 2020 that she is “a much happier person” with Kaulitz in her life.

Klum was previously married to singer Seal from 2005 to 2014 and the two share four children, daughters Leni, 17, and Lou, 11, and sons Henry, 15, Johan, 14. Seal adopted Klum’s daughter Leni, from her relationship with Italian businessman Flavio Briatore, in December 2009.

Suffice it to say, we love the trend we’re seeing lately of fabulous women showing some serious body love — from Elizabeth Hurley to Paulina Porizkova and, of course, Klum. Keep it coming, ladies!

This type of snacks may increase your death risk in heart disease, cancer

High-fat diet can cause chronic pain

Justin Bieber and Selena Gomez Back Together?