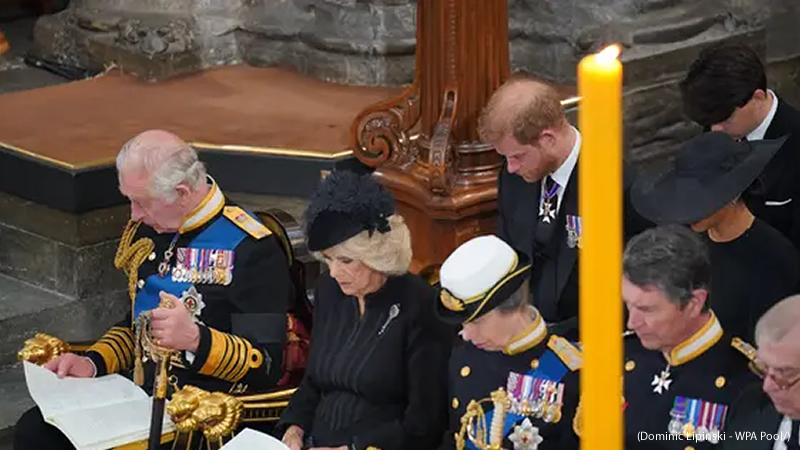 Prince Harry was seated in a “place of honor” during the Queen’s funeral, according to a royal historian.

The Duke and Duchess of Sussex were seated in the second row during the funeral service at Westminster Abbey on Monday. Many wondered why the couple was in that position when they could have joined his brother, Prince William, and his family in the first row.

Royal historian Gareth Russell spoke about the issue. Many speculated that the seating arrangement was a snub to Prince Harry and Markle. However, Russell didn’t see it that way.

“That’s the etiquette. If you know what the etiquette is, it actually is a place of honor,” Russell told Us Weekly Tuesday. “To be the one behind the king is actually a sign of favor. What they seem to have done with this etiquette though is not prioritize [Prince William] or Harry.”

The royal expert added that King Charles was paying respect to his sister, Princess Anne. The new monarch honored their bond and didn’t prioritize his children.

“The king’s major concern has been to give a place of honor to his sister and for the older roles to be relaxed,” Russell continued. “So we saw for the first time a female member of the royal family marching behind the coffin. What we were seeing really was a time for the queen’s children rather than necessarily a focus on the grandchildren.”

He added, “Giving princess Anne her rightful place in the 21st century in monarchy [shows that] she really is her brother’s confidant. She is hugely admired in Britain for her charitable work, and we’ve seen that she is someone who’s dealing with great heartbreak at her mother’s passing.”

Princess Royal made history when she joined her three brothers — King Charles, Prince Andrew, and Prince Edward — during the Vigil of the Princes at St. Giles’ Cathedral in Edinburgh, Scotland. Princess Anne was the first female member of the British royal family to participate in the somber royal tradition.

Another reason Prince Harry was seated in the second row was that the arrangement was in the order of the Queen’s grandchildren’s age, except for Prince William, the heir to the throne. Prince William was seated in the first row with his wife, Kate Middleton, and their two eldest children, Prince George and Princess Charlotte, with Peter Phillips, Zara Tindall, and Mike Tindall.

Prince Harry and Meghan Markle were seated beside Princess Beatrice and her husband Edoardo Mapelli Mozzi.

“The order was approximately age order but trying not to split families up,” an unnamed source at Buckingham Palace told The Daily Beast.