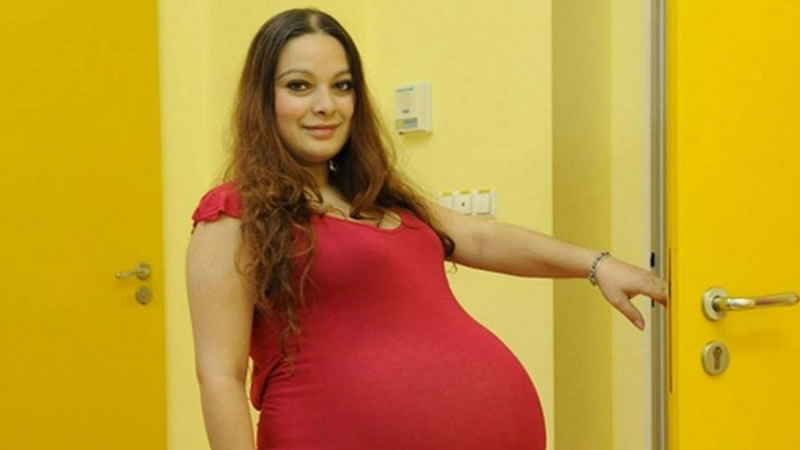 A Czech woman has beaten staggering odds to become pregnant with quintuplets without using IVF. Alexandra Kinova, 23, is due to give birth by Caesarean section on Sunday to the Czech Republic’s first ever set of quins. Ms Kinova, who already has one son, did not realise she was carrying five babies until last month. At first doctors said she was having twins but in March staff at the Prague Institute for the Care of Mother and Child said she was actually pregnant with four children.

However, it was not until the following month that she finally discovered she was having quintuplets. Ms Kinova, from Milovice, about 30 km east of Prague, told Czech news site denik.cz that she was in shock when she was told. She said: ‘When we finally found a fifth head, I started to cry.’ According to local media, her children will be the country’s first set of quins. The odds of conceiving quins naturally is one is several million, according to experts.

The mother said both she and her partner have a family history of twins. She said aside from four months of morning sickness, she has had few complications in the pregnancy. Ms Kinova said she has been able to sleep on her side and has not had any problems with her breathing. And she said she plans to breastfeed all five, as she did with her first-born son. She told denik: ‘The first child I nursed for almost a year and a half and I want to breastfeed now.

‘While I know that some will be on artificial nutrition.’ Ms Kinova said despite the best efforts of the doctors they still do not know the sex of all the babies. Two of the unborn babies are hidden underneath the other three – two boys and a girl, who she plans to call Daniel, Michael and Tereza. She said: ‘I very much look forward to seeing how they will look. It’s a great charm, but we cannot see anything properly – only a head or legs.’

The hospital will double the number of doctors and midwives for her Caesarean. They said they have administered drugs to help speed up the development of the babies’ lungs but they cannot be sure of their condition until they are born. Dr Alena Měchurová, head of the hospital, said they hope that all five babies and the mother will be fine but said they cannot rule out complications.