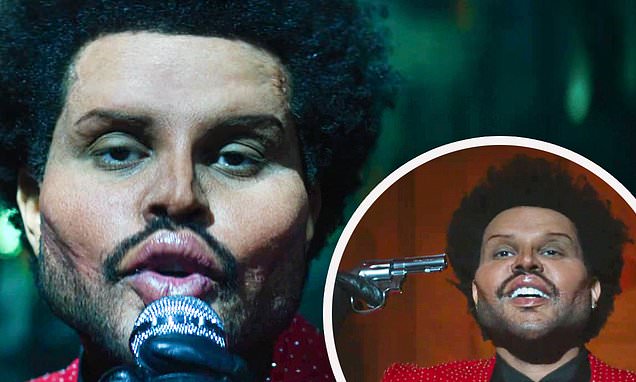 The Weeknd sure is embracing “new year, new you.”

The 30-year-old singer sports some disturbing alterations to his face — akin to extreme plastic surgery — in the video for his new song, “Save Your Tears,” which premiered Tuesday and is from his “After Hours” album.

“But then you saw me, caught you by surprise,” he aptly sings in the video, in which he displays a thinned (and crooked) nose, bloated cheeks, puffed-up lips, surgery scars and other horrific new features.

“Why does The Weeknd look like that in the Save Your Tears music video!?! I don’t like it,” said one horrified fan, while another borrowed lyrics from his 2018 hit “Can’t Feel My Face” to pinpoint a downside to the prosthetics, saying, “i bet he really cant feel his face now.”

One fan speculated that it was “shade” and a response to getting snubbed by the now-postponed 2021 Grammy Awards, a move that apparently left him emotionally bruised — if not physically — and he has continued to vent about.

Other tweeters suggested a new line of work: playing the Batman villain The Joker. Some, meanwhile, drew comparisons to — and called him a “modern version” of — late, surgery-obsessed singer Michael Jackson.

Reps for The Weeknd did not immediately respond to The Post’s request for comment about whether his disturbing new look was achieved through prosthetics or CGI. He has previously worked with Prosthetic Renaissance, a makeup effects studio that is taking credit for the transformation on social media.

Of course, donning heavy makeup is nothing new for The Weeknd, who will perform at the 2021 Super Bowl on Feb. 7.

The music video for his single “Blinding Lights” featured his post-bender bloodied and bruised visage — a look he re-created for the 2020 MTV Video Music Awards last August.