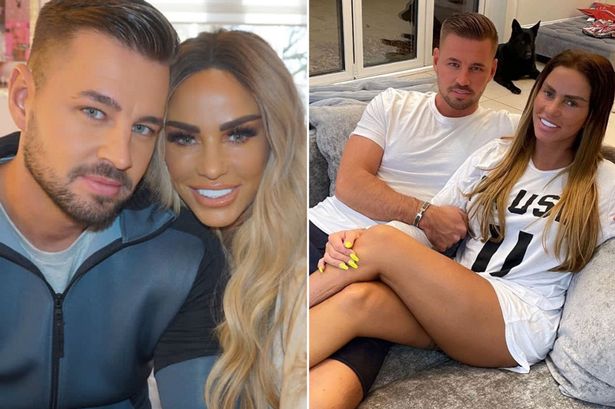 Katie Price has shared her frustration after discovering that her boyfriend had been receiving naughty videos from another woman.about:blank

The former Page 3 legend was left seeing red when she saw the messages that Carl had been receiving on the social media site Instagram via his direct messages.

Katie, 42, took to her Instagram Stories as she watched the videos the girl had sent to her lover, claiming that she was “embarrassed” as she showed the display name of the account to her followers.

The reality bombshell urged her boyfriend Carl Woods to open the messages while Katie stood back and filmed the ordeal for her followers.

Speaking to the camera, Katie said: “So this girl obviously knows I’m with Carl, so why the hell are you sending these to Carl?”

She added: “He doesn’t need to see that when he’s got me.”

Mum-of-five Katie penned alongside her video: “I’m embarrassed to show the other videos as they are vile,

“All I can say is she looks like a rooster. Girl code.”

Katie has been dating former Love Island hopeful, Carl, since June 2020 and often floods her social media as she gushes over her beau.

The pair have already admitted they are hoping to welcome their own child into the world and to tie the knot at the popular showbiz bar, Sheesh, in Essex where they had their first date.

Last month, Katie revealed that the couple were actively trying to start their own family, telling The Sun: “I’m not pregnant yet so I’ve started taking these supplements – they were recommended by a friend,

“I’ve never had to take anything to try and get pregnant before but I’m obviously older now so I need a bit of help – I’m desperate for another baby.”

The pair have also been tracking Katie’s ovulation cycle on the app Maya which she says is “never wrong” in her journey to becoming a mum again.

Katie had hoped to enter the new decade with a baby on the way and an engagement ring on her finger but their “baby-making” trip to the Maldives in October 2020 hadn’t been successful.

Carl has quickly adapted to life with The Pricey, becoming “best friends” with her eldest son Harvey who lives with autism, Prader-Willi syndrome and is also partially blind.

Katie previously told Daily Star: “Even though Harvey doesn’t talk like us he is very clever.

“He draws pictures for Carl and he asks him to do things for him, he calls Carl his best friend.”

This drug can prevent 100% of symptomatic COVID-19 infections